A separate post on this site marks the joy I feel about parts of the Kintyre peninsula in western Scotland. It describes the source of that joy as being the shoreline which Kintyre’s eastern B roads runs adjacent to, with the road at times weaving up and away from the shore which it inevitably falls back to like a snap line. This post homes in on three anchor pins to that snap line, rather than the shoreline itself, one each at the north and south of the peninsula Skipness and the Mull of Kintyre respectively — and one half-way down, Saddell.

Skipness is at the northern end of the B road that runs down the east coast of the Kintyre peninsula. It looks south to the Isle of Arran and had a commanding position to keep eyes on any comings and goings on Kilbrannan Sound. The castle was built in the 12th century by the local lords, the MacSweens, and it later passed to the Stewarts of Mentieth. For two hundred years it guarded the border between the MacDonald Lords of the Isles and the Stewart kings of Scotland. It was held by the MacDonalds from 1325 to 1493. Its location as an administrative hub led to it seeing too much action: it was placed under siege in 1646 and by the the end of that century the castle had been abandoned. Today it is a well-maintained ruin, looked after by Historic Environment Scotland.

Although the castle at Skipness has been rebuilt several times, it shares a visual similarity with the castle over the water at Lochranza on Arran. Both were built by the MacSween family during the 12th century. Both have wonderful pink, cross-bedded sandstone used for quoin stones and to dress archways, windows and doors. This pink sandstone also stands out in two courses near the base of the curtain wall. 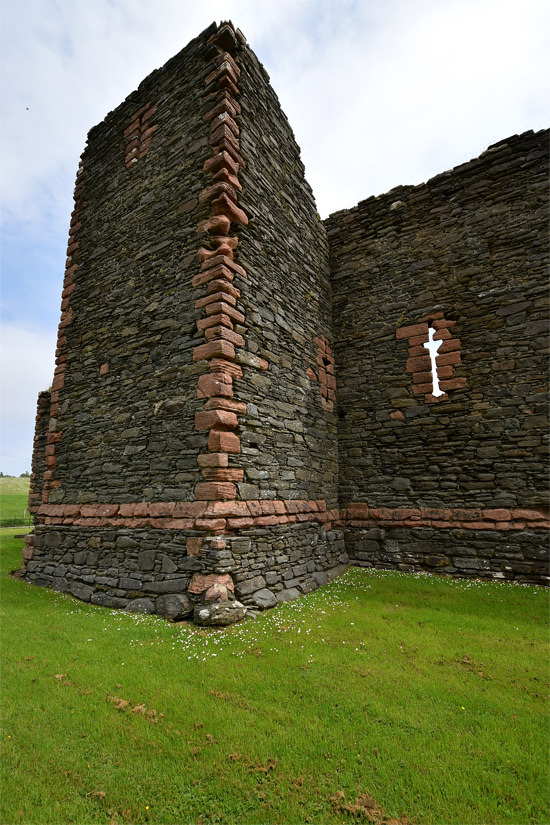 For those interested in the geology of these stones, the possible quarry sites from where they might have been extracted and at which stage in the re-modelling of Skipness Castle (and other Scottish castles), you will probably enjoy the detailed and amply-illustrated paper written under the auspices of the British Geological Survey, cited in the links below. Accordingly, the pink sandstone used here at Skipness was probably quarried on Arran in the 13th and/or 14th centuries.

Some time around the end of the 1200s, the chapel that was inside Skipness Castle was moved out of the castle — its space taken for other functions — and a new chapel was constructed by the shore some 800 yards away. Kilbrannan Chapel, made from the same rough-cut rubble and pink sandstone as the castle itself, is now a ruin but it remained in use until the 18th century.

The ruin of Kilbrannan Chapel

The roofless chapel, whose cap-stones are densely-packed with wild flower-filled turf, stands inside a neat fenced and gated, rectangular graveyard. The place has a special charm. Laid out near the shore and exposed to the elements — sun or gale — these stones and their carvings are silent witness to lives lived in what was once a Scottish frontier region.

The ruin of Kilbrannan Chapel — detail

There are notable stone grave slabs now under protective cover and there are stones whose carvings possess great solemnity, many using images as much as words to say something about the trades and status of those buried here. Skull and crossbones, ships, rope, angels — all were chased by the stonemasons’ chisels. On a June afternoon, bathed with sunlight and punctuated with the cries of oyster-catchers, Kilbrannan Chapel is unexpectedly mood-loaded. We visited expecting nothing in particular but came away entranced. 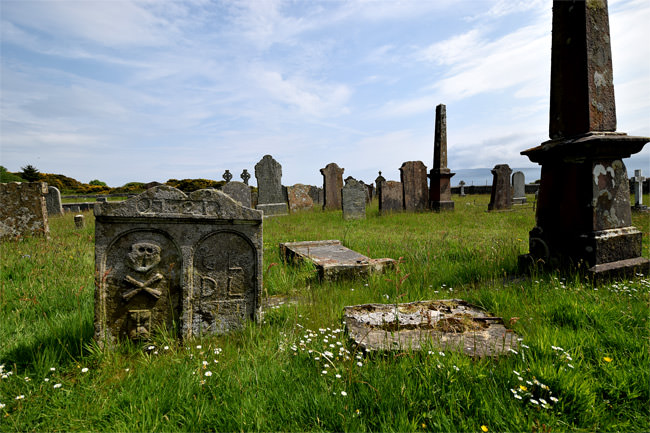 Saddell — half-way down the peninsula — may be known first, if not in name, as the place where a pipe band played Paul McCartney’s 1977 song The Mull of Kintyre. It should be more famous for the Saddell Stones which are proudly displayed next to the ruins of Saddell Abbey.

Saddell is Norse for sandy valley. (Think dingly dell meaning a small wooded valley.) The Norse Vikings settled in this part of Scotland over a thousand years ago, but that dominance ended in the 12th century when the Hebridean warrior Somerled defeated the Norsemen in battle and created what was to become the Lordship of the Isles. It is thought that Somerled invited Cistercian monks to Saddell from Armagh in Ireland to build an abbey between 1148 and 1160. The Cistercian order insisted that their monasteries should not be built in cities, castles or towns, but in places far removed from the conversations of men. Those criteria would probably be satisfied at this place even today.

From them were descended the MacDonald Lords of the Isles who ruled west Scotland until 1493. During that time, delicately-carved but substantial grave slabs were hewn from solid rock, often depicting knights, monks ships and otters. Six hundred of these stones have survived across the Western Highlands, with the largest collection being found on Iona. There are eight collections of this type of stone in Kintyre, including these at Saddell Abbey. They amount to some twelve late medieval stones: one cross, six grave slabs and five effigies. The largest four of these were crafted on Iona.

The remains of Saddell Abbey

A few stunted and tumbled walls remain of the abbey and its church today. Its patrons, the Lords of the Isles, lost their sway. Their lands were forfeited by King James IV in 1493 and the transfer of the lands of Saddell Abbey to the Bishopric of Argyll was authorised by Pope Julius II in 1507. In 1508 the Bishop built himself the nearby Castle. 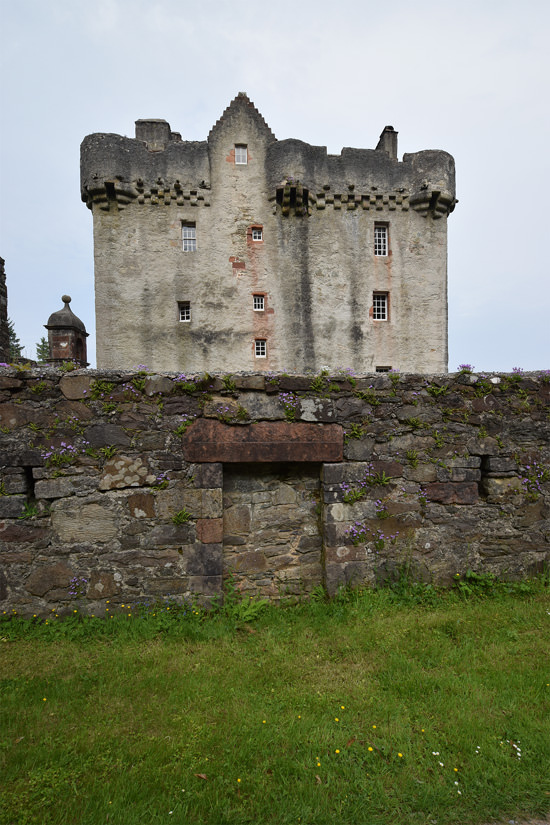 Through the twists and turns of history Saddell Castle came back to Clan MacDonald, was then taken from them on the orders of Queen Mary I of England, and was then then rebuilt by successive MacDonald lords. Nearby Saddell House was built around 1774, whereupon the Castle fell into disrepair. It was restored by the Landmark Trust who now rent it out as self-catering accommodation.

Saddell Castle in its sandy bay

One can reach the castle (not open to the public) down a long shady driveway. A walk round either side of the castle gives onto Saddell Bay, a fine place to watch gannets plunging within sight of the beach. On a grey afternoon in early June by five o’clock, gannets were heaving themselves into the water at a rate sometimes of one every 30 seconds. Apart from ourselves, the beach was empty.

Ferns and flowers at Saddel Castle

To celebrate the Landmark Trust’s 50th anniversary, Antony Gormley was commissioned to place five life-size iron figures at Landmark Trust sites around the UK. One of these, GRIP, is at Saddell Bay. There’s a YouTube drone-video on this installation which is well-worth seeing. 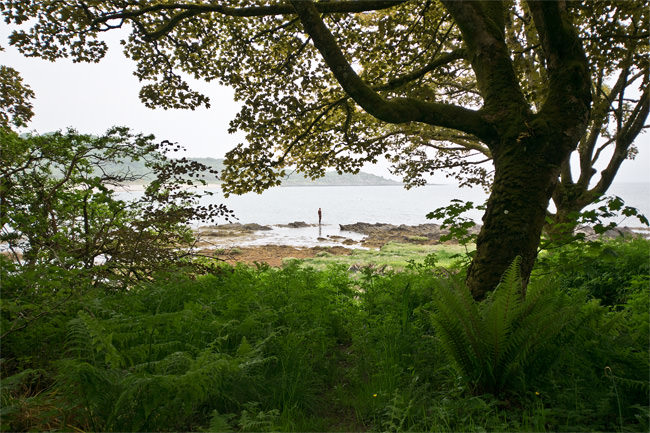 The Mull of Kintyre seems to be a place whose location is much confused. Some take it to be the whole of the Kintyre peninsula, others the southernmost part of the peninsula and others believe it to be the road that leads to the lighthouse. Maps seem to be pretty clear: it’s the south-westernmost tip of the Kintyre peninsula and can be taken to mean the rounded headland on which the lighthouse sits. (There is a Mull of Galloway as well.) Locals also take it to mean the road-less coast that runs from Campbeltown on the east of Kintyre round to Macrihanish on the west. In this final sense, one can sail round the Mull.

One can also drive to above the Mull lighthouse, but going further means abandoning transport and descending on foot along a tarmac road open only to the Northern Lighthouse Board.

What one sees at the Mull depends on the weather and the light. The day we visited was gloomy with the sun making a veiled showing only at the last moment. But we were lucky on two counts. The first, as can be seen below, was that we were able to see Rathlin Island off Northern Ireland’s north coast, and the outline of flat-topped Fair Head which looms above Ballycastle from where one can take a boat to Rathlin. (I have a separate post about Rathlin, which we were lucky enough to visit earlier this year.) Rathlin’s East Lighthouse is apparently visible on clear nights as one drives down Kintyre’s west coast.

Our second stroke of luck was a much rarer thing. As we paused — alone on that huge, rounded headland with a calm sea below us — a cuckoo started to call. Perhaps believing that it had the headland to itself, it then changed perch and flew across our line of sight to land on the cable, clearly silhouetted, which carries electricity, voice or data down the slope to the lighthouse way below us. These are skulking, furtive birds, larger than most people imagine them to be, and seeing one is a memorable event in itself. A fine thing, then, to see one against such an exhilarating backdrop.

Further down on these mist-wreathed slopes is the memorial commemorating the twenty-nine victims of the Chinook helicopter crash of 1994.

South of the Macrihanish Bird Observatory — and technically still on The Mull, given previous comments — is the natural amphitheatre of the Gauldrons, where scree slopes fall down to the shore, covered with vast colonies of adult giant butterbur and yellow flag irises, the former with huge rhubarb-like leaves. 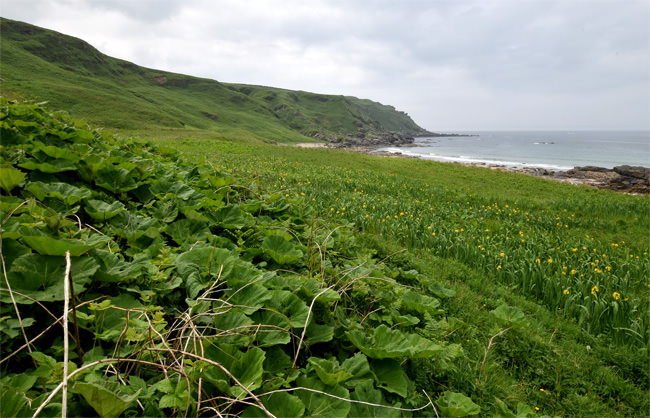 The natural amphitheatre of the Gauldrons, with scree slopes colonised with giant butterbur and yellow flag irises, south of Macrihanish

One could no doubt visit these three places in one and the same day, but that would miss the point that travelling the B road on Kintyre’s east coast is such a special experience. It can be a journey from A to B to C. It can also be a slow, winding process during which, in Robert Macfarlane’s words (which I’ve quoted and discussed elsewhere on this site), one asks what does one know in this place that one can know nowhere else and, vainly, what does this place know of me that I cannot know of myself?

The Mull of Kintyre and Macrihanish