Browning's "Oh, to be in England now that April's there" tugs with even greater poignancy as May moves on and the season's heat builds under blue skies. Rural England in full verdant bloom must be locked in the memory of so many travellers abroad. However strongly that image is etched, no return to the heart of this green can ever carry disappointment.

Great Chalfield Manor could be the perfect archetype of such a memory-fixing place. The late and lauded Nikolaus Pevsner, in his volume on Wiltshire, was of the opinion that Great Chalfield was "one of the most perfect examples of the late medieval English manor house, mellow in its buff stone and happily balanced in the composition of its façade without being pedantically symmetrical". That it is also cradled in unspoilt countryside - and maintained to be a haven for wildlife - serves to heap on the charm. Surely, even a sullen November day wouldn't stop the place exerting its magnetic pull. 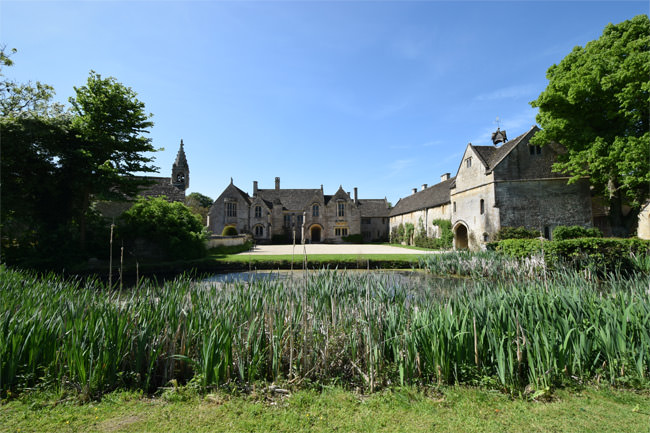 I know of no more kindly approach to such a place. There is no grand and imposing line of trees, no intimidating defences, no sweeping vista to bring one to the door. Instead, with lush hedges and mature trees cocooning the narrow lanes, one emerges into the open to find the manor low-lying at the end of its courtyard. Parking is on the lane's verge. No tarmac, kiosks or barriers. Step away from the few parked cars and walk across a moat, crunching gravel under foot - and into history. 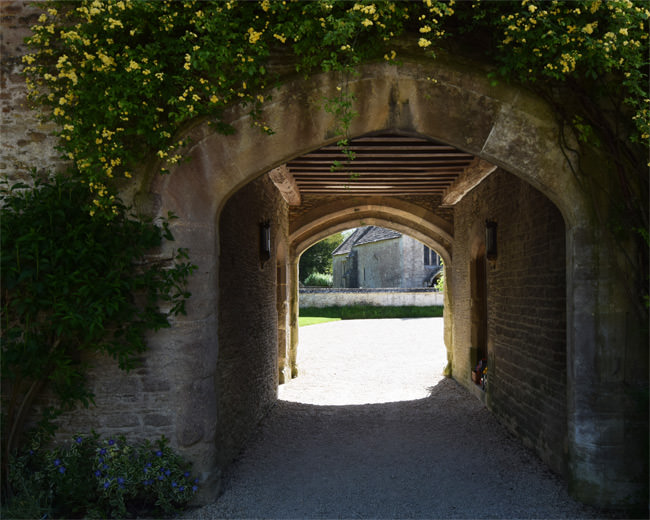 Stumps of defensive outer walls, a gatehouse and part of the nave of the parish church, these had their foundations set in the 14th century - or even earlier, but much of the manor has survived more or less intact from the 15th century. 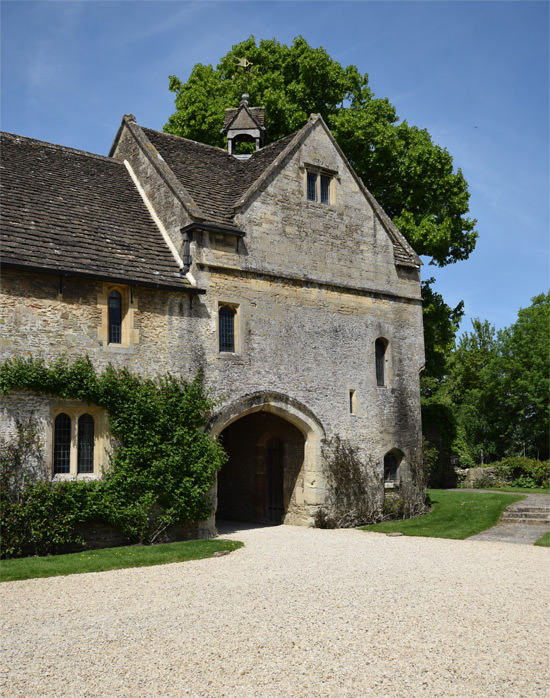 Remodelling and - in some cases - re-building was carried out in the 18th century and more extensively in Edwardian times, especially the garden walls and outbuildings. Exceptionally, the north front of the manor remains more or less as it was when built in 1467-80. The solid front door and its inner wicket door allowing entry one at a time, really is the original one. 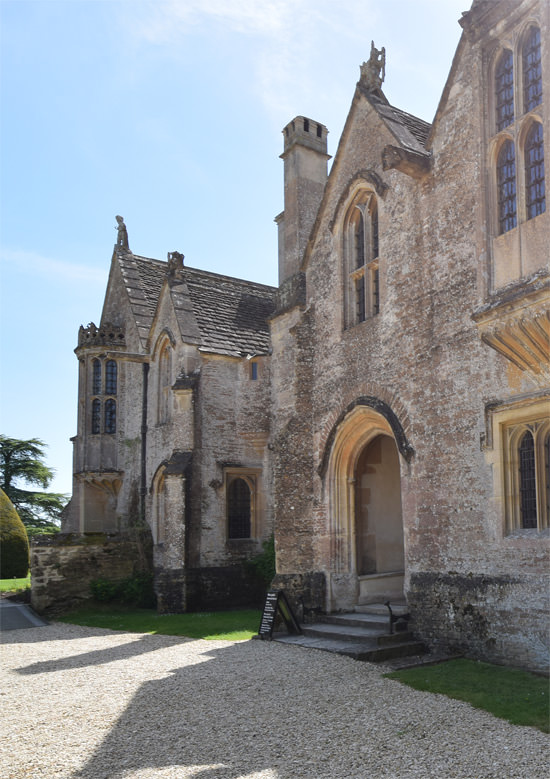 Great Chalfield remains lived in. Part of it is occupied by descendants of the family that bought the property in 1878 and who gave it to the National Trust in 1943. It is therefore home to the donor family tenants who manage the house on behalf of the Trust. Access to the interior is in the company of very informative guides; strictly no photography inside. 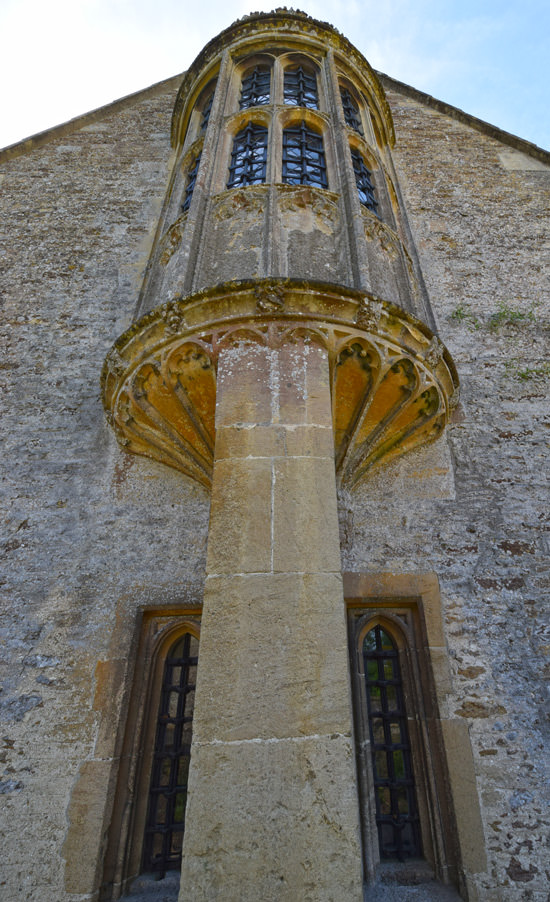 Nearby Lacock Abbey has three oriel windows in the Gothic style that were added by Fox Talbot in about 1830. These two oriel windows here at Great Chalfield are 15th century originals. The larger, east window is to the solar or great chamber (above), which was used for honoured guests, and the smaller west window was to the family's own private apartment. 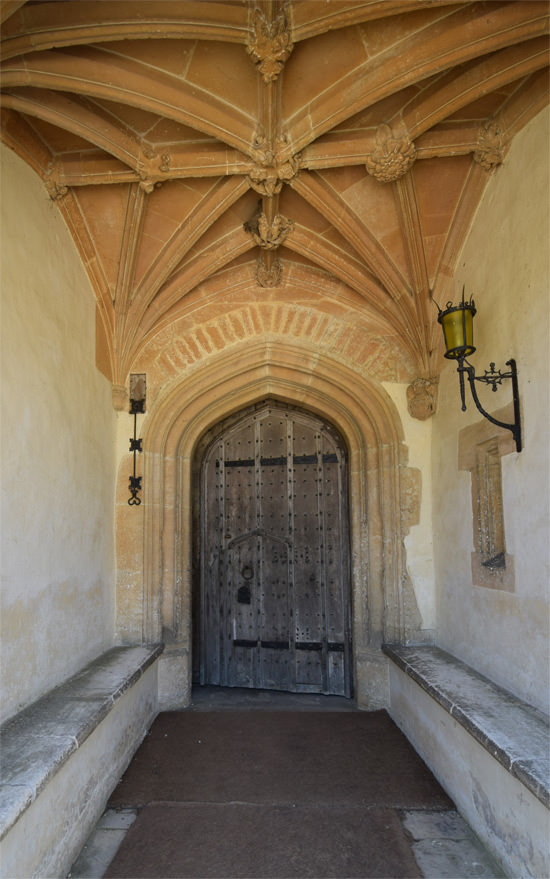 Shakespeare's King Duncan enters Macbeth's castle noting that martins are nesting on its walls. "This guest of summer / The temple-haunting martlet does approve / By his beloved mansionry, that the heaven's breath / Smells wooingly here: no jutty frieze, / Buttress, nor coign of vantage, but this bird / Hath made his pendent bed and procreant cradle: / Where they most breed and haunt, I have observed, / The air is delicate." His noting of these birds and their nests dispelled his suspicion of Macbeth. Where such birds nested, nothing bad could possibly happen to him, was the King's fateful conclusion. No such suspicions here at Great Chalfield these days. Just such a nest clings to the vaulted ceiling of the entrance porch, no doubt as there has always been.

An Arts and Crafts garden

Chalfield's garden was largely created before the First World War. The orchard, moat and stewponds were landscaped and a planting scheme of paved walks and borders was established. Traditional native plants and flowers were made use of, in decreasing formality as one passes from house to field, a tradition maintained by the present tenants. This arrangement seems to be a perfect complement to the Manor, cradling it organically into the gentle Wiltshire countryside. 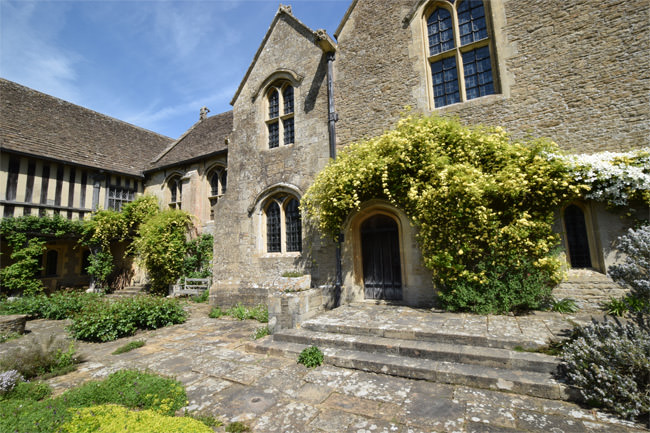 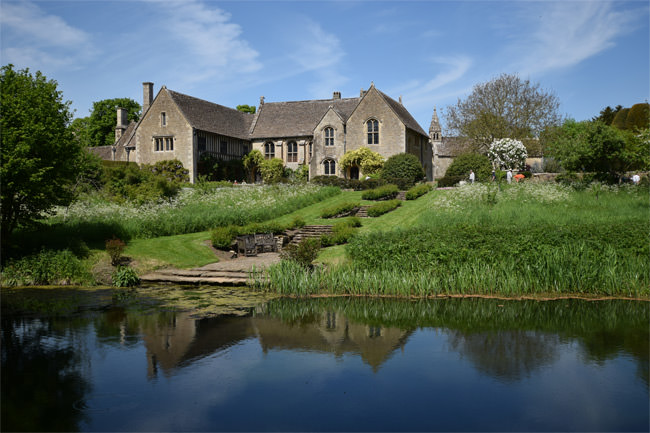 Great Chalfield seen from across the lower moat 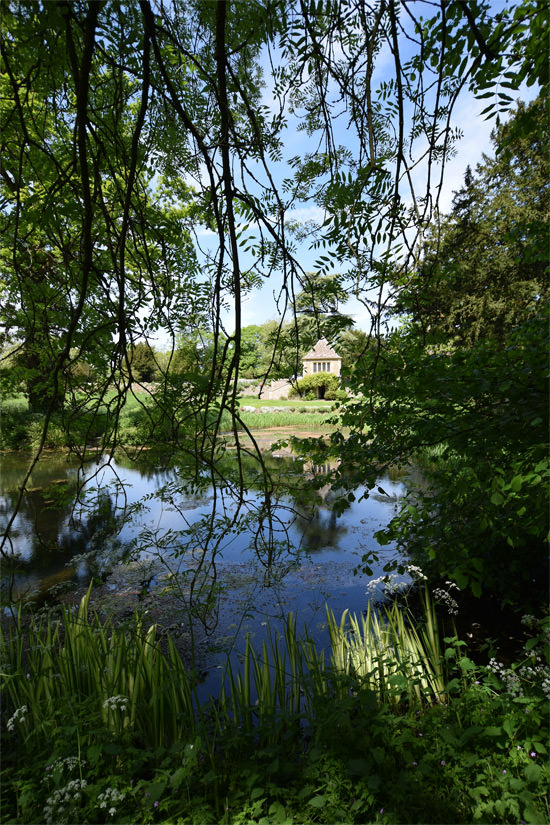 The gazebo seen from over the fish pond 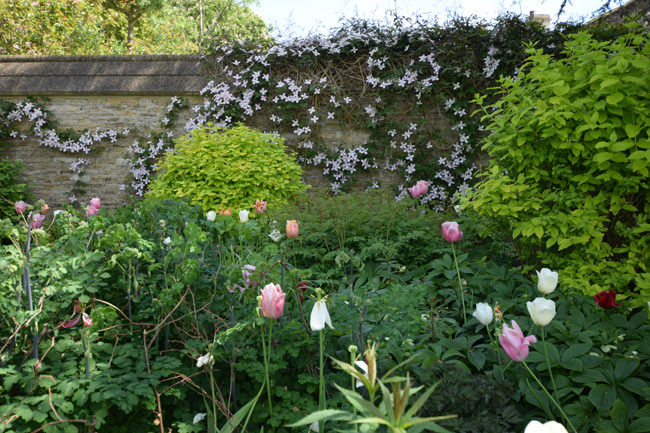 Planting beside the gazebo 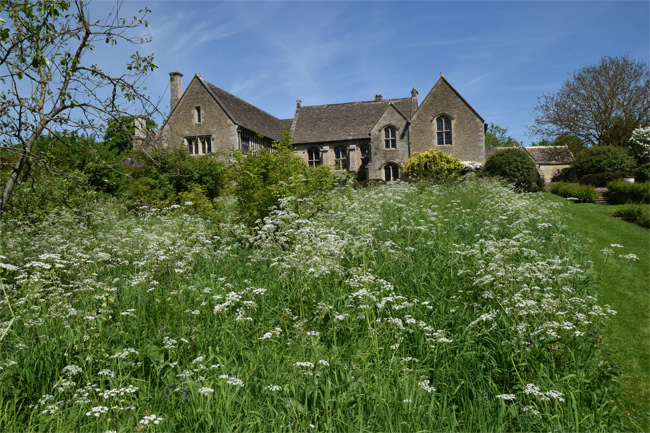 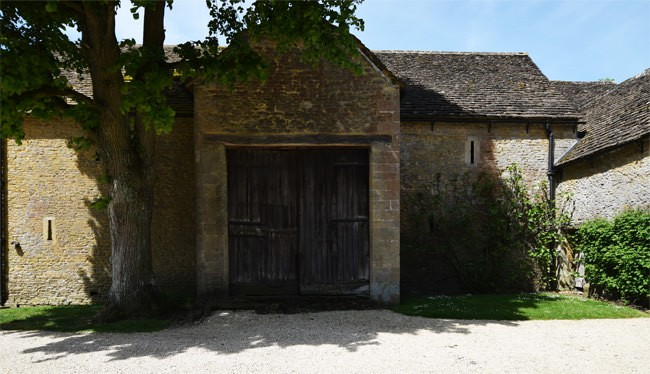 The Church of All Saints nestles close by the Manor, inside its moat, accessible through the Manor's gatehouse. The building's progressive evolution since 1316, through the Middle Ages and into the 20th century and beyond, have left a well-preserved, simple, place of worship surrounded by the resting places of occupants of the parish from down the ages. It currently serves a parish of perhaps less than 20 souls. 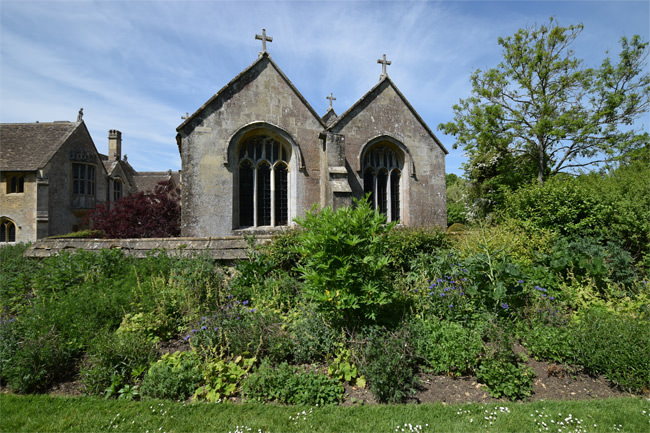 The Church of All Saints at Chalfield Manor 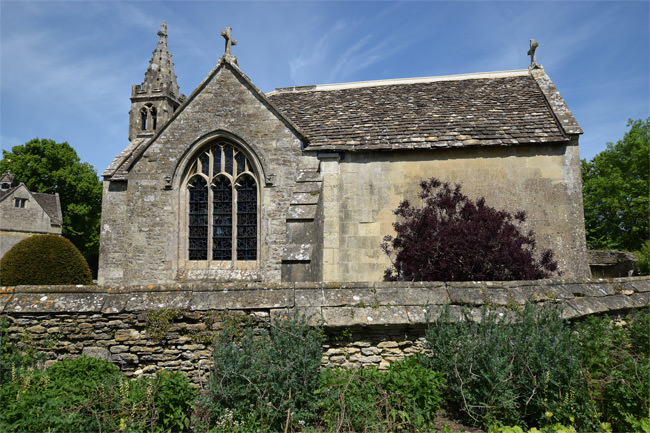 All Saints Parish Church - Great Chalfield - The Parable of the Sower stained glass window by Andrew Taylor, installed in 1999.

This window, viewed in the cool of the church, is as glorious as could be. Its symbolism (of the parable of the sower), its agrarian and natural themes and its vibrant colours join so many dots and add to Great Chalfield's harmony and sense of place. (Don't stained-glass windows always say that the whole is greater than the sum of the parts?) A visit to the artist Andrew Tayor's website is illuminating, so to speak! 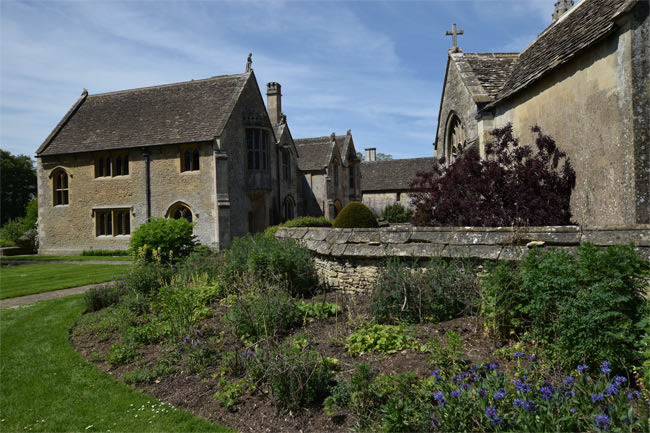 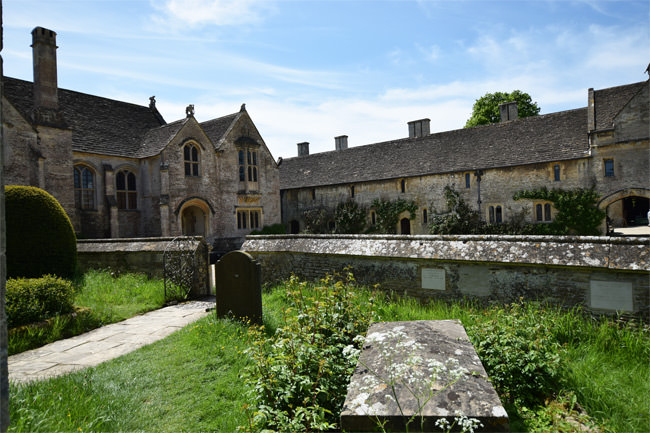 As usual there is a hinterland of detail that I have left out or am ignorant of and parts which I may have tangled or mangled. Readers can find that elsewhere. My purposes are more impressionistic, and the photographs are supposed to be the predominant medium. Snaps, snapshots in time and impressions.

Great Chalfield under azure blue skies in May beguilingly offers visitors a bridge to the past, more unencumbered than most historic places are by the fashion for artifice and an egregious temptation towards commercialism. Where that bridge takes one is a personal thing, but the journey here is an uncomplicated one, when you step onto that grass verge at the side of the narrow lane.