It has been difficult not to glimpse the Brighton i360's pencil-thin outline from the South Downs, showing it black against the sea below it or flashing sunlight off its aluminium and glass surfaces as the coast curves round from Worthing's staid and matronly position some 10 miles away. Occasionally we catch sight of its ellipsoid capsule suspended above low cloud as if some UFO has come to visit. The controversy of slapping an uber-modern tourist frippery right in front of Brighton's historic Regency Square and the furore about its initial funding kept us away. Bit by bit these visual temptations must have weakened our resolve and one fine autumn afternoon last year, we paid the i360 a visit.

The i360 is a vertical pier, incapable of replacing Brighton's 1866 West Pier which finally succumbed to fire in 2003. At 453 feet high the i360 is considerably smaller than the pier's full length of 1,115 feet and is perfectly aligned between the remains of the old pier and Regency Square. The square was built between 1818 and 1828 and the West Pier was opened in 1866. This history is amply acknowledged by the i360 using a pair of Italianate toll booths to book-end the space-age tower, one salvaged and restored, the other new and made to match it. 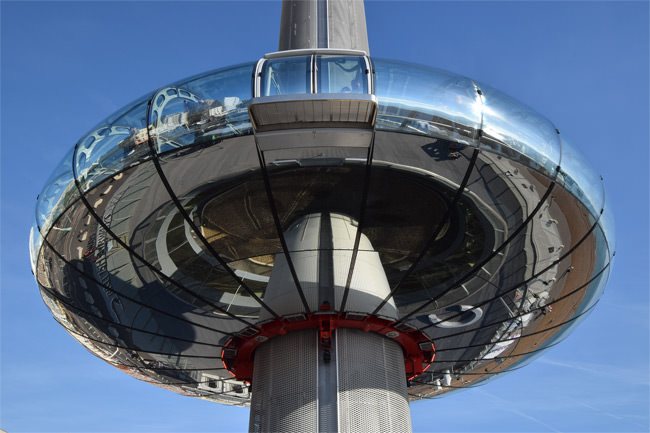 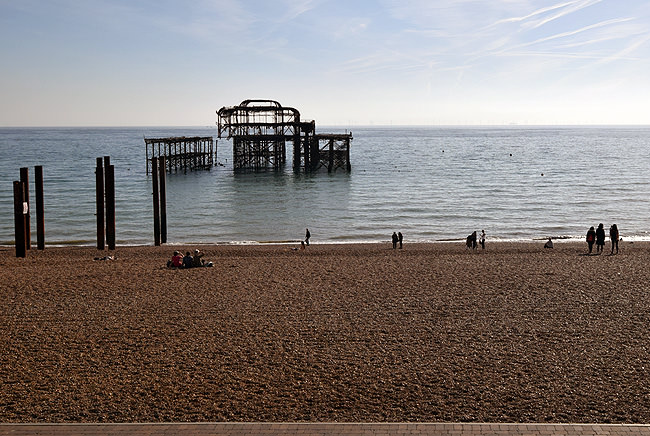 The remains of Brighton's 1866 West Pier viewed from the base of the i360.

The tower is made of 17 steel tubes, each having a diameter of 3.9 metres. These tubes vary in length, from 4.5 metres at the base to 12 metres at the top. Their thickness reduces from bottom to top, from 85mm to 20mm. Tube weight diminishes as the tower rises, from 45 to 85 tonnes.

Putting all this together was an engineering feat. Once the massive foundations were in place, the tubes could then be lifted in place. The bottom tube was first anchored onto the foundations, then the bottom three tubes and the top four were stacked and bolted together. A jacking crane then gripped the top four cans and lifted them sufficient for the fifth-from-top tube to be slid into place and bolted on to this upper assembly. This procedure was carried out ten times until all the tubes were in place. 1,336 bolts were used to hold these tower tubes together. After 10 weeks of lifting and bolting, the tower reached its final height in August 2015.

The capsule was designed to lift 200 people to the top of the tower. Its oblate ellipsoid shape (minus its top and bottom cores) weighs 74 tonnes and has a diameter of 18 metres. It was prefabricated in 60 separate sections. Counterweights inside the tower are winched down for the capsule's ascent. When the winch cables are slackened, gravity allows the capsule to descend and the counterweights rise again. On board, one's vision detects a falling or rising horizon before one feels the capsule's vertical movement. It really is that smooth.

Inside the Brighton i360's capsule 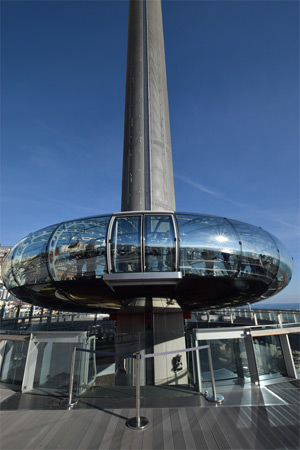 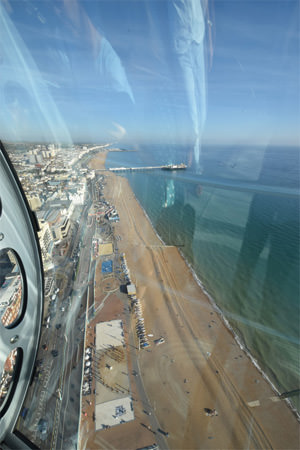 Looking west through the double-curved, double-glazed laminate glass of the Brighton i360's capsule

If you can brave the inevitable shopping experience before and after what is called your flight up the i360, then the views are worth it. Roof-top graffiti, the sprawl of Brighton and Hove, the Palace Pier's seaside riot, how small even the enormous Brighton Marina seems, all these are fascinating. With fine visibility, you may just see the Isle of Wight 48 miles away.

But note this: the i360 is exactly the same height as Beachy Head to the east, the UK's highest chalk sea cliff. When Antoni Gaudí dreamed up Barcelona's La Sagrada Familia basilica (post on this site), he insisted that its tallest spire should ascend no closer to heaven than the adjacent Montjuïc hill. His creation, it was said, should not surpass God's and that wish will be respected when the building is finally complete, its highest stone perched beneath that skyline by just a sliver. Symbolic centimetres less for the i360 might have had it respectfully doffing its hat to the surrounding South Downs without equalling it or rivalling it. No poise without balance. In offering us a nice and short, ephemeral flight of fancy, the i360 makes no pretensions of durability. Its uber-solid foundations reassure building control and the faint-hearted. It offers a modern take on the seaside funfare. But unlike the return from a walk on the ancient Downs, the descent will probably leave few lasting impressions. It is unashamedly engineering eye-candy, the sort of thing that the British seaside has long embraced.