House for an Art Lover

On the inside this might be just another sugar-coated wedding venue - for which purpose it can indeed be hired - but the grey flanked House for an Art Lover in Glasgow's Bellahouston Park is another key to unlocking the visionary output of the architect and designer couple Charles Rennie Mackintosh (1868 - 1928) and his wife Margaret Macdonald Mackintosh (1864 - 1933).

In late 1900 an invitation was published in an influential German magazine inviting architects and designers from across Europe to take part in a competition to design a Wohnhaus eines Kunttfreundes, now known as the House for an Art Lover. The entry specified tight conditions for room sizes, a parkland setting, a modern design and a maximum budget of 120,000 German Marks. Should the winning design ever be built, its originator was promised the position of design and artistic direction of the work. This was primarily an academic exercise. Thirty-six entries were submitted, of which two were from Britain: Charles Rennie Mackintosh and M.H.B. Scott.

All but one of these entries failed to satisfy the requirement that accepted practice in domestic design be fully challenged. The single design that met that criterion was Mackintosh's but unfortunately his otherwise winning entry was disqualified because he had failed to provide the required interior perspective drawings. No first prize was awarded. 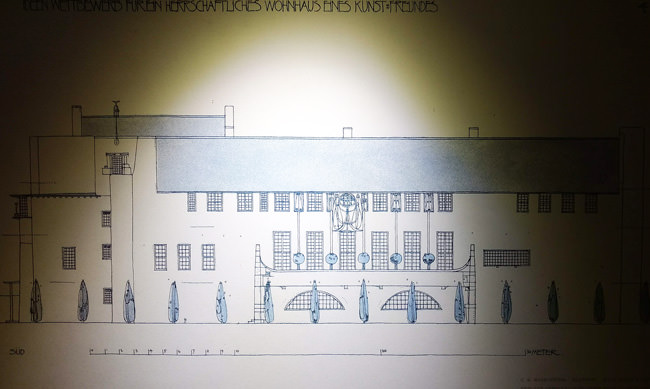 The House for an Art Lover, south façade, Mackintosh drawing, 1901

In spite of this upset, Mackintosh was invited to provide the missing drawings, which he did, and he was duly awarded a subsidiary prize. The magazine's editor had secured in advance the right to publish the 'winning' designs and these appeared at the Turin International Exhibition in 1902 and again in the Dekorative Kunst magazine of that same year.

Mackintosh's designs were then published widely and in detail - and they rapidly garnered praise. Here was a design for a domestic property - albeit a large one - that was singular and unified, uncompromised by dialogue with a client who might otherwise have blunted the designer's vision.

Here in a single design was a building of supreme vision, way ahead of its time in so many ways. What it lacked was a real building and a client to pay for it. This would eventually happen, but not until between 1989 and 1996. For Mackintosh, the build was posthumous; for followers of his work, drawings and a building are arguably better than just the drawings.

The role of Margaret Macdonald

Charles Mackintosh and Margaret Macdonald married on August 22nd 1900. News of the competition of the design of this house would have reached them as newly-weds. Mackintosh's drawings for the property and its interiors credit his wife in various places (notably for the panels in the living room and music room) and her contribution to the project is utterly unmissable. We also know that the invitation to compete contained an additional directive that 'it is permissible and even desirable that an Architect and a Decorative Artist of modern tastes develop and submit the design jointly'. How else could this be read but as a joint invitation that the Mackintoshes accepted on just those terms? In the submitted drawings of the interiors, the emphasis given to symbolic shapes and figures, to the rose, to stencils of flowers and the human form - all these are the meeting points of these two artists' interests. The designs submitted for this project can genuinely be thought of as being theirs, not his alone.

On seeing the Mackintosh drawings, a leading critic of architecture, Hermann Muthesius, wrote that 'it exhibits an absolutely original character, unlike anything else known'. Part of this originality stems most obviously from how the pair interpreted the competition's brief. Where most entrants might have provided for an abundance of bare walls against which the eponymous art lover would have been able to hang or display his or her beloved art, the Mackintoshes didn't allow their designs to travel that way. Quite the contrary, in fact: their building has little space for the display of art. The building itself is the work of art. It is adorned, bedecked, encrusted and awash with its own art and artistry. The art lovers of this building were its architect, its designer and its - as yet - non-existent client. But the client was not supposed to have art of his or her own. This art was to be occupied. Throw that back into the competition's face - and receive commendation for it!

The path from fourteen drawings to one building

This story subsequently jumped nearly eight decades, landing at Craigie Hall, a fine stone house in Bellahouston Park, Glasgow. Graham Roxburgh was on the lookout for suitable premises for his team of consulting engineers when he came across Craigie Hall which was built in 1873 by the Glasgow architect that the young Charles Rennie Mackintosh had worked for. In the early 1890s, the 25 year-old Mackintosh was assigned the job of proposing interior refurbishments which included carved wooden fittings, a white-panelled drawing room extension and the wooden casings for an organ. The property needed extensive renovation, but this put Roxburgh intimately in touch with the fabric of some of Mackintosh's early work. Craigie Hall became the base for a successful design office inside a significant architectural site.

Roxburgh's passion for the House for an Art Lover took off when he was shown the Mackintoshes' original drawings in the Hunterian Gallery of the University of Glasgow. From then on, an interest became a dream, the dream a plan, the plan a sequence of meetings to persuade other interested parties - notably the Glasgow City Planning Department - and eventually the necessary funding. By 1988 Roxburgh's team was joined by Professor Andrew MacMillan, Head of the Mackintosh School of Architecture in Glasgow in the capacity of Consultant Architect. Work commenced in July 1989. After numerous setbacks, project completion arrived in 1996. Roxburgh's Building the Dream (see references below) details the behind-the-scenes moves and I recommend that as a comprehensive account of how the project was brought to life from a couple of handfuls of drawings made at the very beginning of the 20th century.

The House for an Art Lover that stands in Bellahouston Park today is a public building open as a sort of time capsule that explores how this Mackintosh design might have looked were it to have been built. It contains the principle spaces drawn by the two Mackintoshes and interpreted by the project team, together with spaces to eat and meet. It is also available as a space to hire for meetings, conferences and weddings. As a visitor attraction it 30 full-time staff and as many again of part-time staff, generating funds that drive other initiatives in Glasgow.

The building's exterior projects the familiar Mackintosh style of minimal decoration with its mass and outline opting for simplicity and clean lines. This is cousin to Mackintosh's Windyhill and The Hill House. A grey harling style render conceals construction joints, allowing the flat planes uninterrupted expression. Key exceptions come in the rows of windows, some curved, and in the large, stone Tree of Life relief on the south façade, which is a re-working of the relief that Mackintosh had by then designed for the principle façade of the Glasgow School of Art.

The House for an Art Lover, south-east perspective, Mackintosh drawing 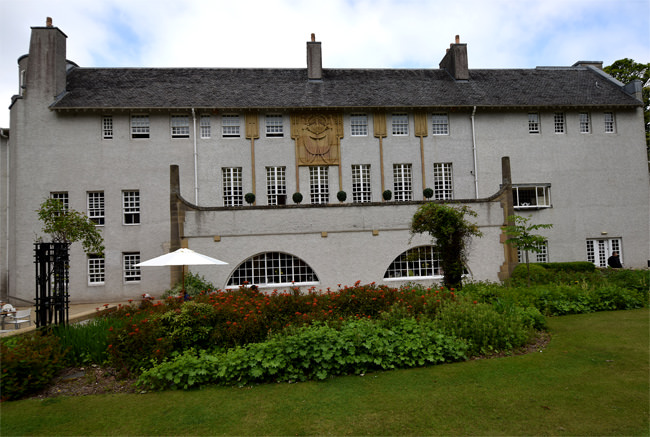 The House for an Art Lover, south façade, completed 1996 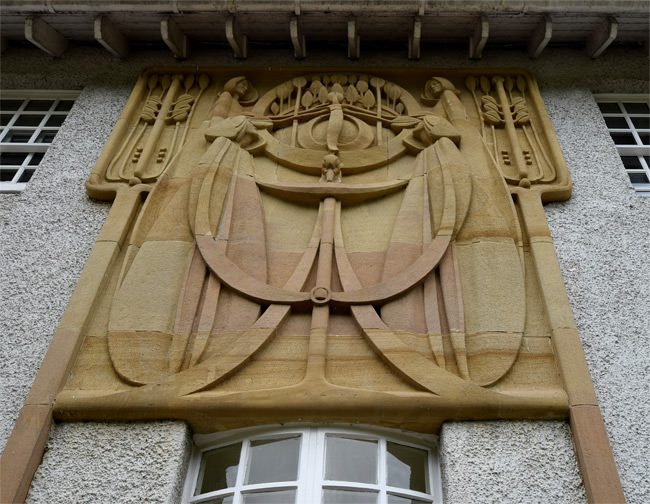 The House for an Art Lover, south façade, stone Tree of Life relief

The House for an Art Lover, east façade

The House for an Art Lover, north-east perspective, Mackintosh drawing

The music room is awash with light, the six pairs of curved doors allow light to stream in, as sunlight between trees, with fabric panels guarding each opening to the upper terrace. The barrel-vaulted ceiling, whose curve chimes with that of the terrace doors, is supported on three sides by slender, tapering pillars. These pillars are cousins to those in the Glasgow School of Art's extraordinary library, creating a room-within-a-room effect. Their tapering is so slender that they may not have a supporting function and, indeed, Mackintosh may have thought of them as not even touching the ceiling, leaving the slightest air gap between wood and plaster.

The House for an Art Lover, the music room

The House for an Art Lover, the music room

Paintwork is a rigorous abundance of off-white. Red roses and emerald green leaves are seeded throughout the sylvan glade. The result seems to be chapel-like, a shrine not so much to music, but to the fecundity of the natural and the spiritual world. 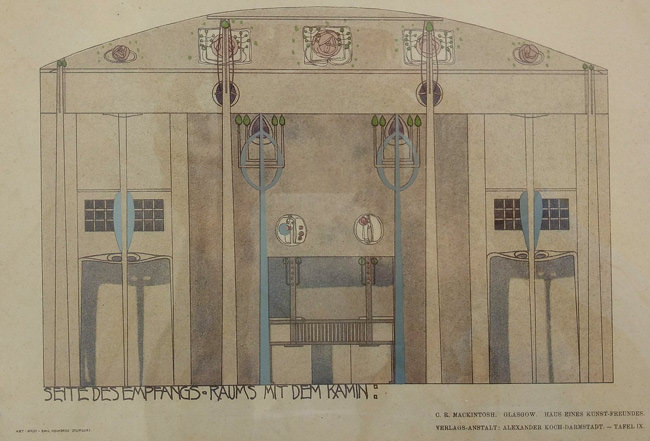 The House for an Art Lover, the music room fireplace, Mackintosh drawing 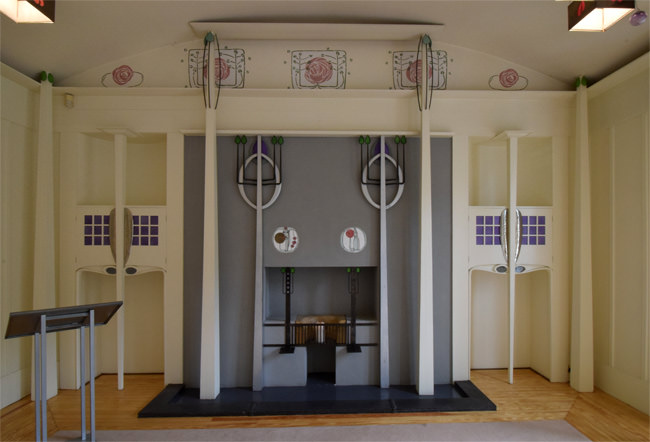 The House for an Art Lover, the music room fireplace 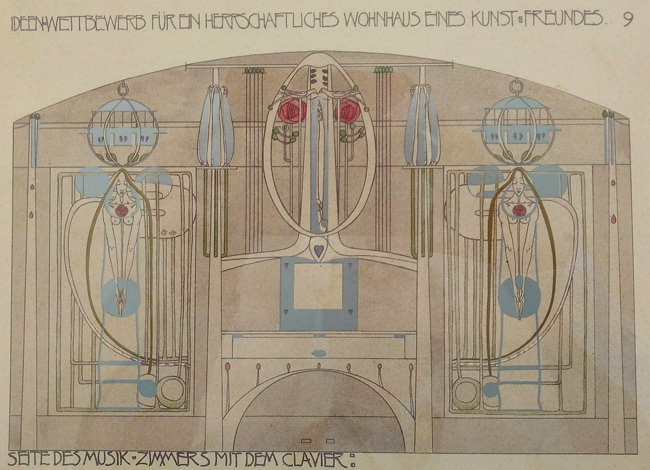 The House for an Art Lover, the music room piano and panels drawing

The organ - a polar opposite to the heavy wooden one that Mackintosh designed for Craigie Hall - seems here to be issuing its ethereal chords without need for any organist.

The House for an Art Lover, the music room piano

Both ends of this room, organ and fireplace, seem to be focal points, altars in some devotional space.

The dining room continues the barrel-vault ceiling and the rose symbolism from the music room, but here the feel is Japanese with dark panels topped with stylised female forms, an exercise in Art Nouveau restraint. 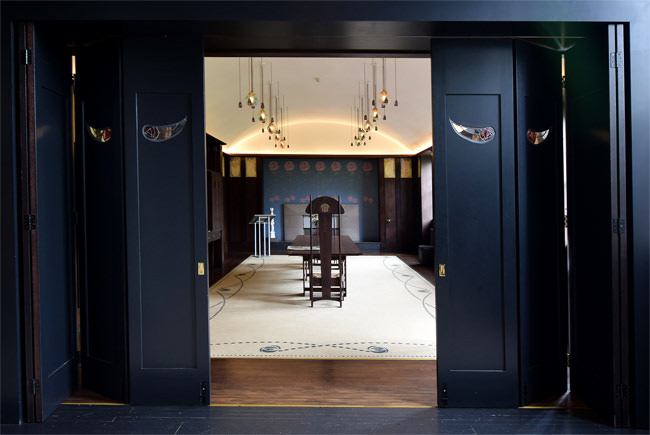 The House for an Art Lover, doors to the dining room

The House for an Art Lover, Mackintosh drawing for the dining room

The House for an Art Lover, the dining room

An oval room adjacent to the dining room is once again an off-white space, but this time on a more human scale. This was conceived as the room to which the ladies retired after dinner. A similar, rectangular one for the gentlemen is on the opposite side of the corridor. The curvilinear and rectilinear gender symbolism is unmissable.

The House for an Art Lover, the oval room

Two curved and panelled walls meet either side of the room's only window, under which are placed two narrow bench seats facing each other, an intimate tête-à-tête space, a sunlit and luminous version of the shaded one that Mackintosh had provided upstairs for Walter and Anna Blackie at The Hill House.

The House for an Art Lover, the oval room window seat

An architectural original or a pastiche?

The project team made no bones about the fact that they were working from competition drawings - and an intimate knowledge of the work of the Mackintoshes, yes. But they were not working from architectural plans with all the required detail. These they had to create using the competition drawings as starting points. The interior décor was something that they were able to follow with a high degree of accuracy with only a small amount of interpretation being required.

'Is this a Mackintosh building?' is the question most people ask. This is not a building whose creation from plan to completion was overseen by the Mackintoshes. It is a building that embodies the designs they submitted for that competition in Germany in 1901. After the second fire that has recently befallen the Glasgow School of Art, perhaps the city cherishes this unusual House for an Art Lover even more.