The oldest rocks in Britain are found in the Outer Hebrides. These are twisted Lewisian gneisses which were formed up to 3,000 million years ago, two-thirds of the known age of our planet. Essentially, they are igneous rocks made from magma deep within the planet, then cooled, crushed, twisted, compressed and layered over vast expanses of time. To walk on and among them is breath-taking.

Equally breath-taking is the beach of Uig Bay in Lewis's north-west corner, variously a grey, dismal place, roiled by ocean currents and westerly winds or balmy and sun-kissed as if the haunt of mermaids. Which of these one enjoys - and both are enjoyable in their own way - depends both on season and on the light of the moment as the cloud ceiling closes in to shut out the light or parts to throw down lances of pure brilliance. 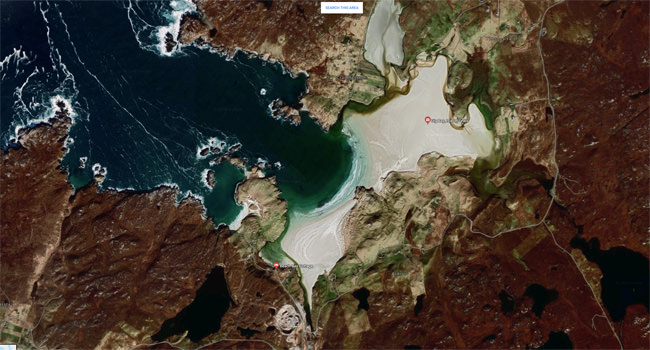 Judging by what my computer screen revealed when I asked Google to show me Uig Sands, their satellite passed overhead when the mermaids were playing. Fix that in memory: a seemingly protected inlet ringed with straw-coloured sand, a perfect curve where land meets water, scribed on the planet's surface. To the north-west is ocean. Everywhere else is sodden bog land, either reflecting light or pitted with black, water-filled lakes as if they were entrances into an underworld. 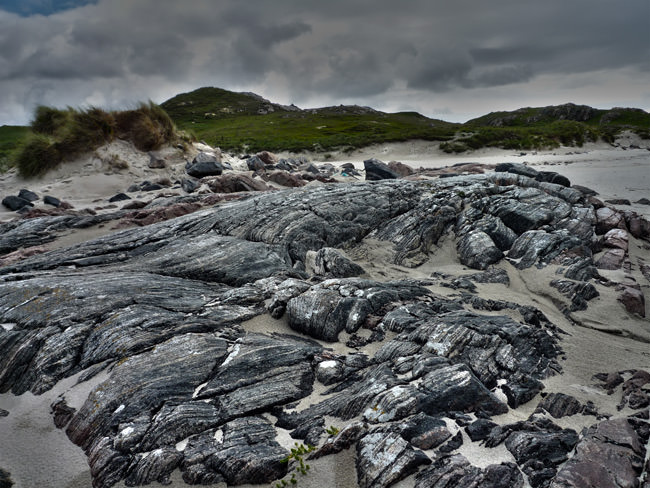 When we trod the sands, mesmerised, the mermaids were in hiding and the sea was as grey as the sky. Twelve degrees centigrade at the end of July 2012, after a week of heatwave some 15 degrees higher! Such is Scotland with its contrary climate. Pack both swimmers and jumpers; take only one and you will need the other.

Uig Bay, the Isle of Lewis

Even so, rocks of impossible ages fringed the beach, slate grey, coal black, rust red, verdigris, topaz and purple, an abundance of colour even if we were ignorant of their composition. It is as if they were formed from the very chemical constituents of our planet, squeezed and baked into permanence, forced out of the planet's core half a billion sunrises ago, then worn down by aeons of wind and tide. The wind dries them; the tide gives them a shine. 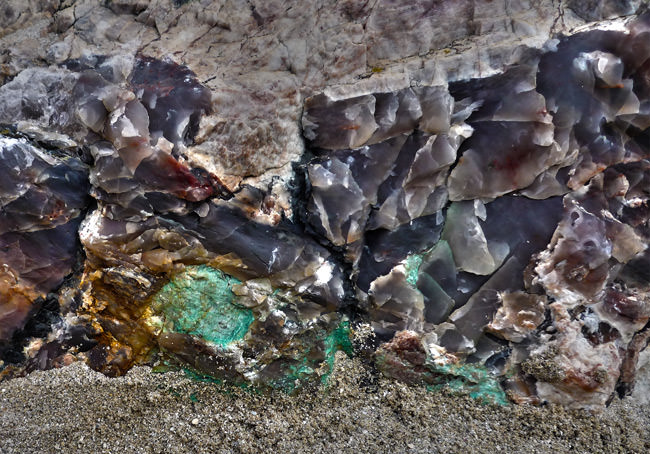 In 1831, one Malcolm Macleod of Pennydonald found hidden inside a small stone structure in one of the dunes on Uig Bay's fringe a collection of 93 exquisitely carved chess pieces, gaming pieces and a carved belt buckle. A fine hoard and a fine find. The place alone we found to be treasure enough. 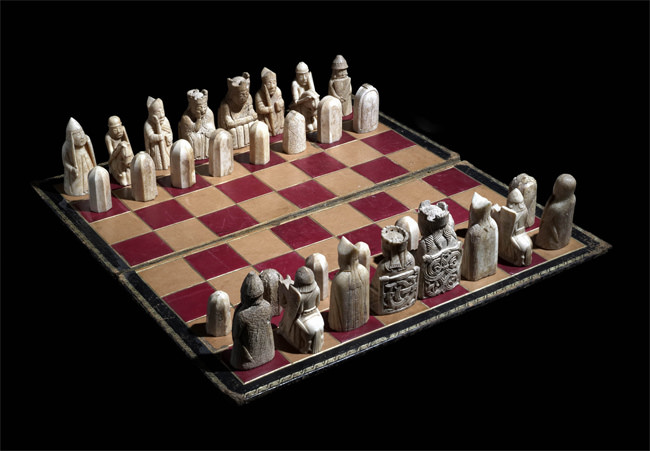 The Uig Chessmen, © Trustees of the British Museum

These mysterious pieces were carved out of walrus ivory; that much is known. Beyond that, it is calculated that they would probably have been made in Norway in the twelfth century, a period when the Norse ruled Scotland's Western Isles. When found, several of the pieces were stained red. The red-white disposition of the pieces was common in the Middle Ages, with the familiar black-white one being a more recent adoption.

Part of the sign describing the Uig Chessmen, Uig Sands, Isle of Lewis.

A fraction of these pieces is on display in the Uig Community Centre. The remainder are based in the British Museum in London, from where they are sent out on exhibition world-wide. Controversy about their removal from Lewis in the first place, like the ocean that washes Uig's beach, alternates between turmoil and glassy calm.

One of the set's two kings served as the model for a large wooden sculpture, its back to the tides, placed to mark the find, a life-like representation. 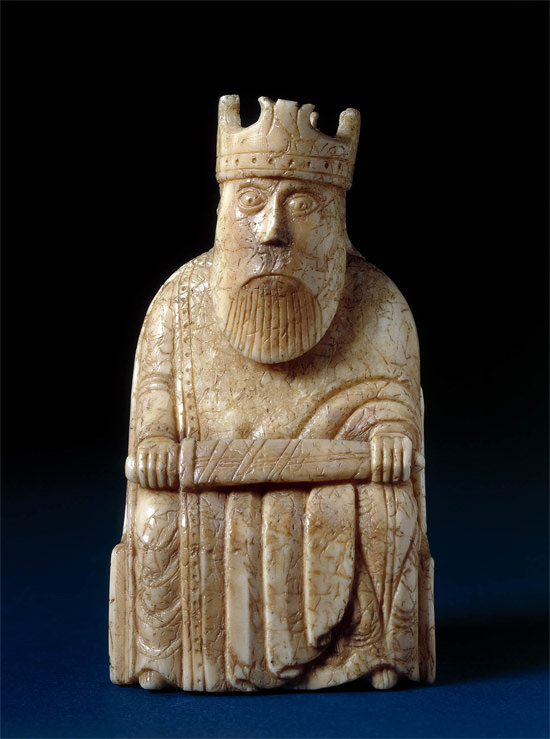 Enrobed, enthroned and grasping a short sword, one hand on its hilt, the other on its scabbard, the king scowls at us out of an unknown past. Whether he has been polished by the carver or by generations of players, there's no knowing. His speechless rule had an interrupted reign. Better - probably - to be on the museum circuit to be stared at by us pointing crowds than rolled in a cloth in darkness beneath the dunes. 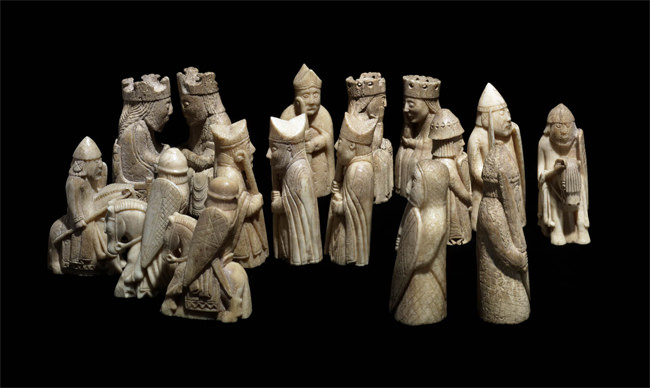 They make a fine collection, a complete chess set - plus other bits and pieces. The featureless pawns faithfully represent the dispensable peasants, numerous but powerless fodder.

The British Museum tells us that chess was used to sharpen a knight's tactical abilities and was originally seen as one of seven knightly accomplishments. The Church came to forbid clergy playing chess, although that view was gradually relaxed by the start of the eleventh century. From then onwards it became a flirtatious activity associated with the battle of the sexes in medieval love poetry. 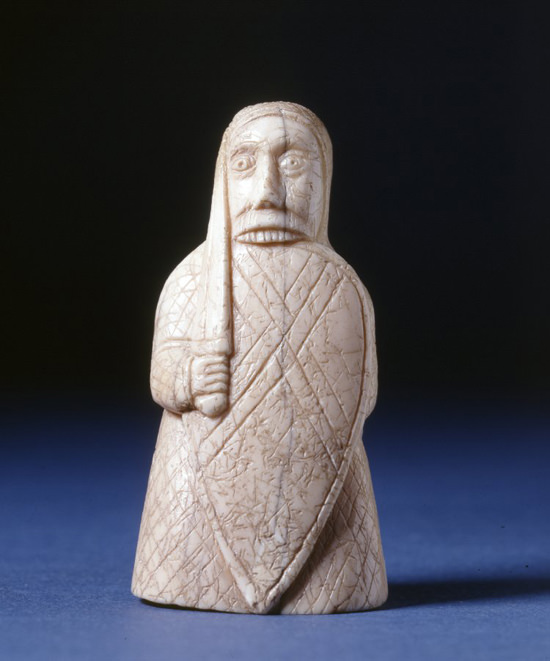 A darker aspect - clouds scudding above the dunes - is represented by the berserkers, the Norwegian rooks whose job was to enforce the king's rule. Running amok with horizontal and vertical menace, teeth prominent above their Viking shields, their threat of berserk retribution would chill the blood. Trondheim's rule had to be enforced and they would work in concert with their king to castle anyone. Their alternate castle name is suggestive of rolling, medieval siege engines.

Not knowing how these pieces ended up under Uig's dunes switches on our brain's fictive circuitry and invites embellishment. The wild north Atlantic did not wash these pieces ashore; the under-dune cairn attests to that. Possibilities ferment as to whose hands built the cairn and placed the pieces under it. It could have been a fugitive man of the cloth, fearing interdiction for his intellectual pursuit. Kneeling in the sands, his back to the wind, he would have introduced these bone miniatures into darkness, knowing that their flickering light would be too bright to be tolerated in the oncoming gloom. Or a Norse brigand - or two - gone rogue from an overlord, pulled into the uninhabited bay under a mackerel sky, seeking a safe deposit place for a stolen hoard.

The burial of this treasure, too hot to handle, would have spooled out on the stage of this timeless bay littered with rock of a wild and unimaginable age. Take a walk on Uig's sands and see if you can resist their backwards pull into history.