I'd not be troubled if above the entrance to the Giant's Causeway Visitor Centre it said "Here be Giants" because everything about this place is, well, gigantic, whether stamped into being by Finn McCool on his own or by a league of giants bashing basalt into 3, 4, 5, 6 or 7-sided columns (although mostly hexagonal ones) as a prelude to some wild and improbable muster. Would that be any easier to understand than a narrative that tells of volcanic activity 50-60 million years ago which squeezed out of the earth some 40,000 black basalt columns? The Visitors Centre does both, and amply, in a spectacular fashion so that one is prepared for the descent to this other-worldly shoreline. 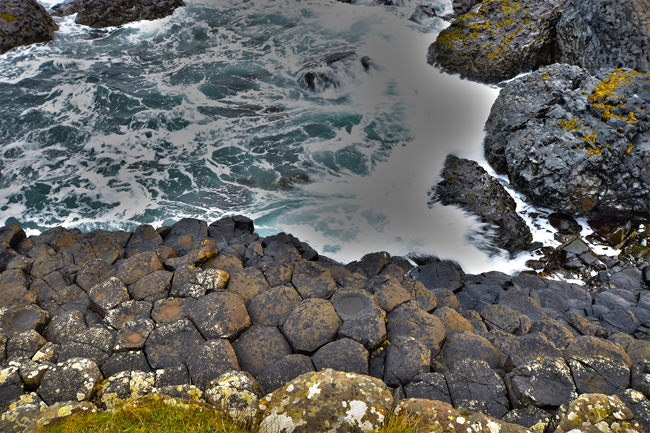 Basalt blocks on the shoreline of the Giant's Causeway

The first surprise is that the place is vast. A dozen or so bays and headlands weave along this section of the North Antrim coast. Six miles of footpaths follow this wavy line, some climbing from beach to cliff-top, threading their way safely across steep slopes, some being on-the-level, wheelchair-friendly trundles. The National Trust maintains these against the non-stop march of erosion. The typical starting point offers views above The Little Causeway and The Middle Causeway before disgorging you onto the edge of The Grand Causeway, names adopted over the years as the Causeway's renown has attracted visitors from far and wide. 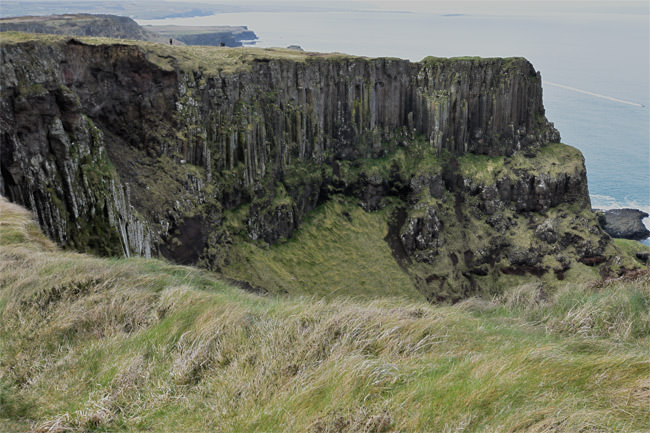 Columns at the top of the amphitheatre of the Giant's Causeway

The place's scale is such that even crowds of the gaping and enthralled don't need to jostle for their own space. It accommodates everyone. The apostrophe in the name is in the wrong place. Move it rightwards one step and it becomes the Giants' Causeway. It has to have been the work of that cabal of giants, not just the labour of Finn McCool on his own. 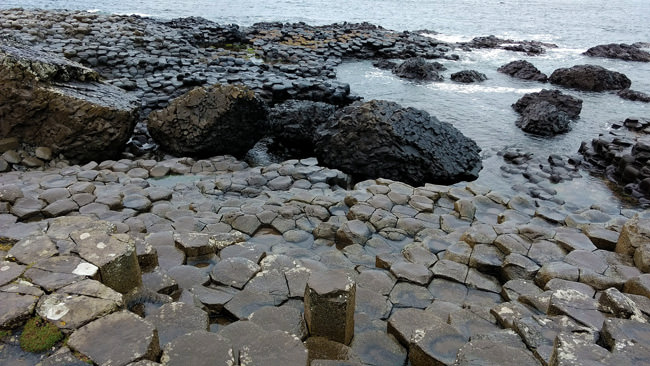 Basalt blocks and the Giant's Marbles, fragmented and irregular because of faster cooling

Geometric blocks are everywhere, hexagons in the main. They lie on the shoreline, rounded by the sea and lichen-covered. They bulge out from the hillsides, flanks of them, cheese-wired away from their neighbours before settling from liquid magma to rock. They teeter skywards in pinnacles atop cliffs. Thousands of them. 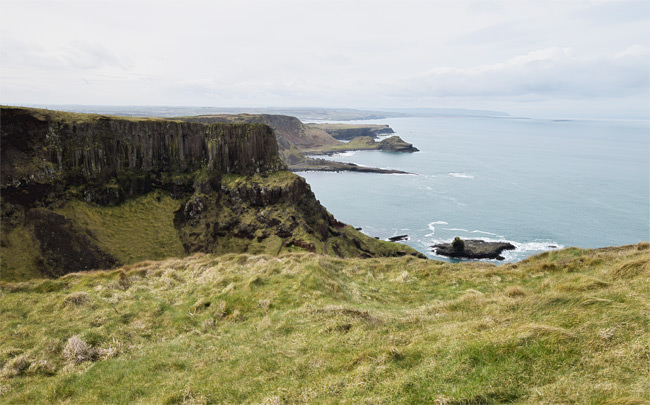 The amphitheatre in the foreground, with the Grand Causeway then the Granny in the background

Shakespeare had Cassius tell Brutus that Caesar bestrode the world like a Colossus and that they, petty men, walked under his huge legs and peeped about. Julius McCool and his friends stamped about. Everybody seeing the result today is peeping about. 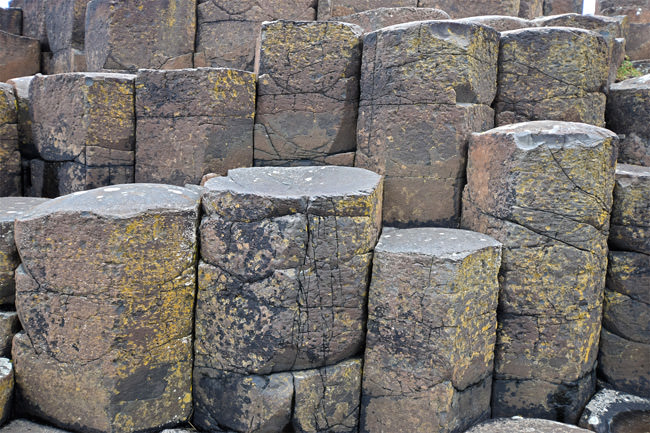 Geologists say that these blocks were formed when volcanic lava oozed from fissures and started to cool and contract. Magma that is basalt has a greater tendency to fracture than other type of magma, and it does this when the rate of cooling is slow. The resulting contraction pulls blocks apart from each other polygonally. When this process happens under water, the basalt assumes a distinctive pillow shape, several examples of which lie dotted about the Causeway. 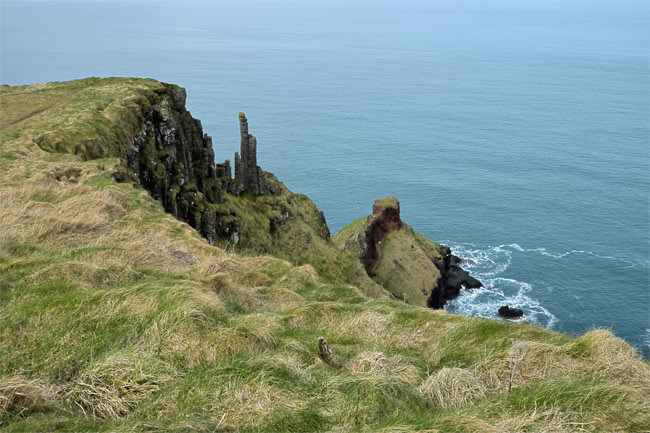 The Giant's Chimneys, exposed to the erosion process 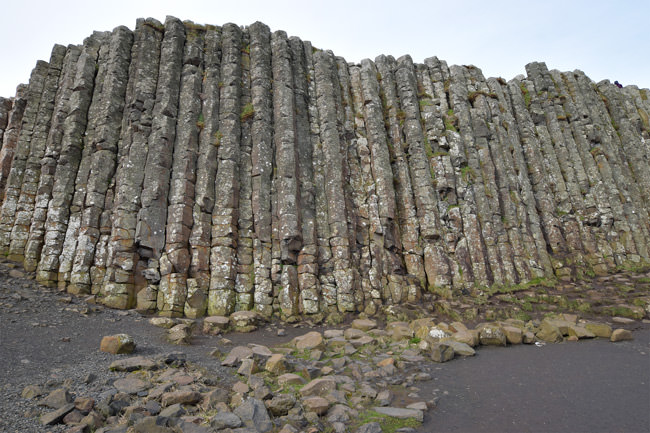 The Giant's Loom, an array of columns reaching 10 metres in height. 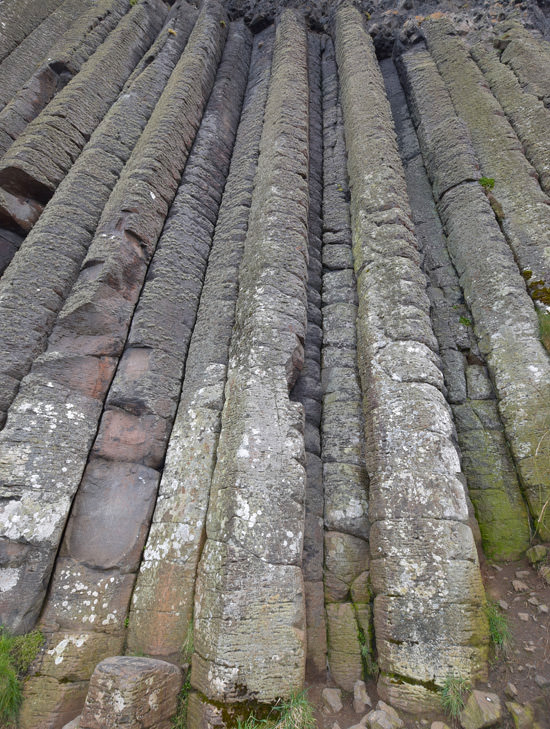 Part of the Giant's Organ, reaching 12 metres in height 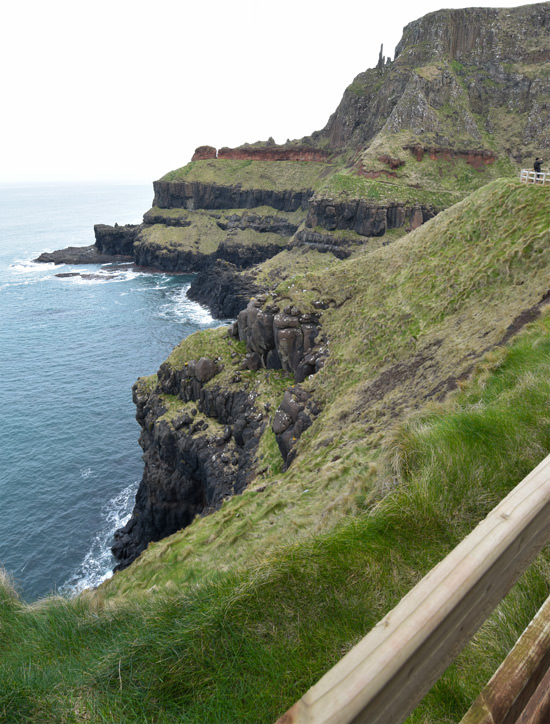 A band of red laterite, a basalt with a high oxidized iron content, lying between two much thicker layers of darker basalt 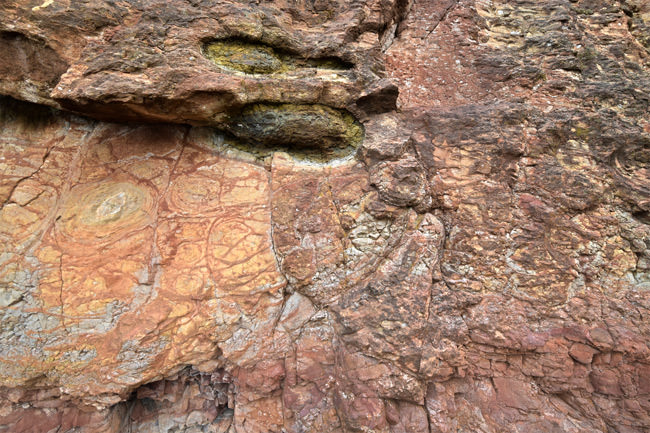 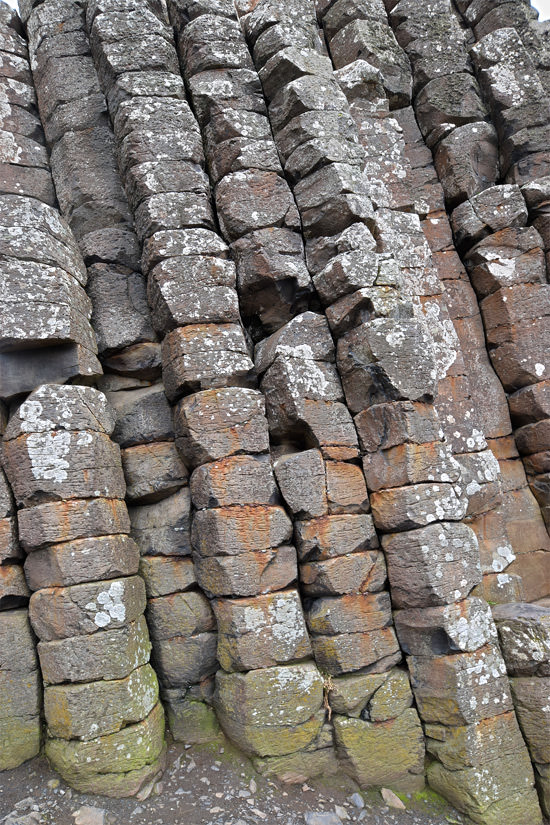 The Giant's Loom in close-up 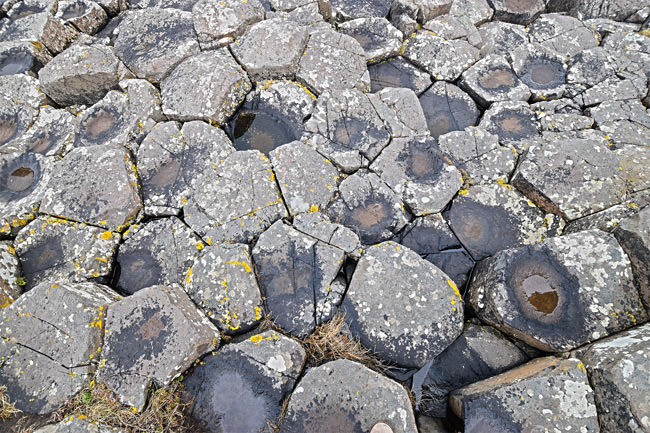 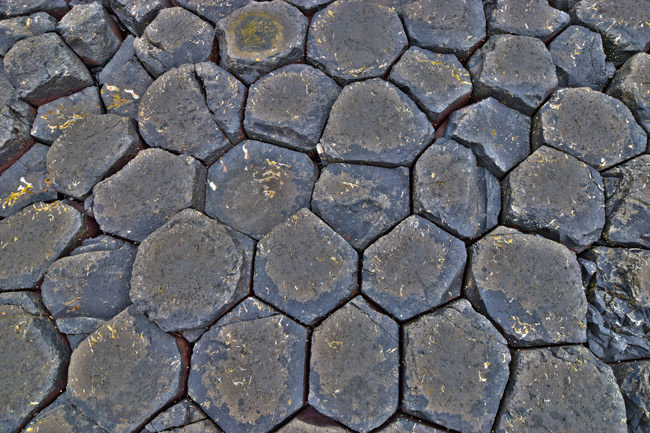 The Causeway's Visitor Centre deserves special mention as a functional building handling huge visitor throughput (between 500,000 and 700,000 people a year) which blends seamlessly into this particular environment. Black basalt mullions frame narrow vertical windows along a triangular façade that appears to cut into the hillside. This shields the approach to the car park from view. Although the building really is huge (1800 square metres) - for toilets, café, souvenir sales, educational animations, excellent scale dioramas, tourist information and books - nothing is visible from the seaward side. Opened in 2012, as a replacement for the previous centre which was destroyed by fire in 2000, the Centre had a final cost of £18.5 million. Its light footprint through its high thermal mass, use of rainwater from the grass roof to flush the toilets, etc., is suited to the Causeway's UNESCO World Heritage status. The project was funded as follows: 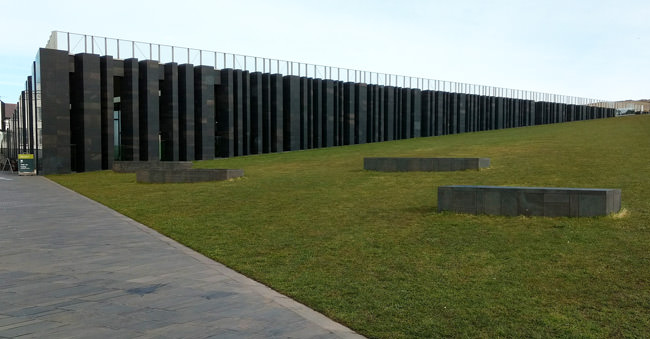 Attention to detail is everything with even the car park being paved with hexagonal sets. Hidden under these are air ducts and 4.5km of collector pipes for a ground-source heating system; boreholes were not permitted because the basalt foundations are protected. 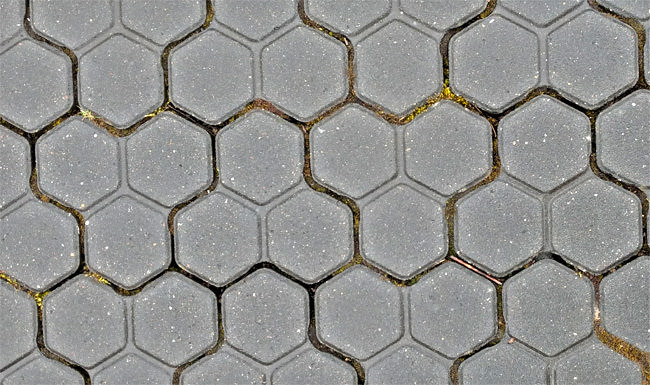 Even the Causeway's car park has hexagons!

This is a visitor centre of minimal intrusion and considerable wow factor, both stylish and sympathetic to this phenomenal environment. It will not detract from one's visit to the Causeway.

The Giant's Causeway is vast. It is immensely popular and rightly so. It swallows people and is easily big enough never to feel as if you are in a crowd. In fact, being with people from all corners of the globe effectively reduced to whispering in wonder at the place is quite something. The place is exceptionally well-maintained with no litter and an absolute minimum of human footprint, installations, concrete, steel or plastic. Toilets are out of sight back at the Visitor Centre. There are absolutely no kiosks. The only obvious signs of a built-environment are excellent pathways, excellent signs and lifebelts on sturdy posts down at the shoreline. Everything else is nature's exquisite gift to us.

Be prepared for rain or drizzle. If you can manage it, stay nearby for more than just one day so that you have a better chance of blue skies. On our visit we mostly missed that, as you can see, and it made not the slightest difference. Go to see it and suspend your disbelief! This is a truly breath-taking place, a natural wonder that tugs at the curtain of our understanding.