When the rain of Derbyshire falls on the Peak District, the stones of Haddon Hall are scoured by it and progressively rounded. The castle's ancient sluice-ways run silver alongside the timeless footsteps of its occupants. Though each weigh little by the minute, by the century their passage sculpts visible traces on the surface of the castle's ancient courtyards. It is as if the tumble of the River Wye below is mocked by the steadfastness of the castle's ramparts above it. The place is a triumph of masonry over gravity and erosion. Grey limestone and yellow grit-stone close ranks against the elements. 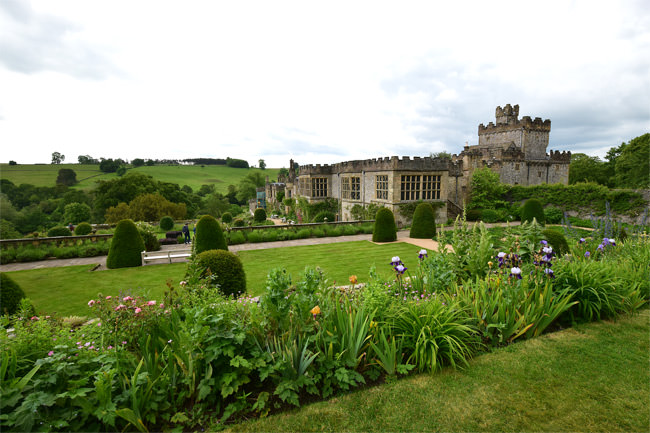 Haddon Hall in a fold of the Peak District

Haddon is one of England's best-preserved fortified manor houses left over from the Middle Ages and Tudor period. A house and chapel were first built here around 1150. King John granted the right to lightly fortify the site in 1195. The addition of battlements was begun in 1370, along with the raising of a Banqueting Hall and a solar. Progressive improvements were added in bursts. The Banqueting Hall acquired a screen and a chimney in 1450; a parlour and great chamber with frescoes were fashioned at the end of that century; an Elizabethan Long Gallery was added before the end of the 16th century. Then in 1703, when the 9th Earl of Rutland was created 1st Duke of Rutland and Marquess of Granby and the family moved to Belvoir Castle, Haddon remained empty for 200 years. It is once again occupied by the same family, continuing a line of ownership lasting over 400 years. The battlements, turrets and crenelations are fashion statements and the building never needed to defend itself from action. Although restoration has been extensive, the air of ancient authenticity is unmissable. 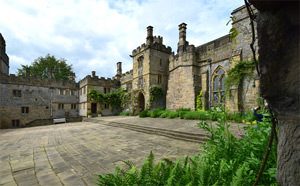 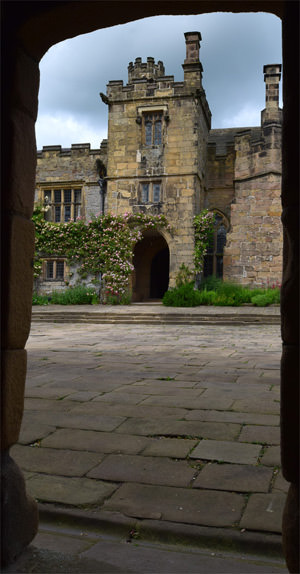 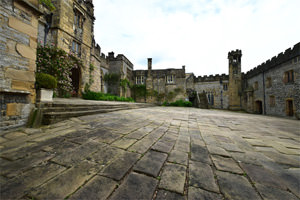 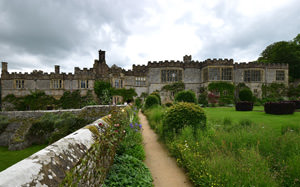 One of Haddon's many garden terraces 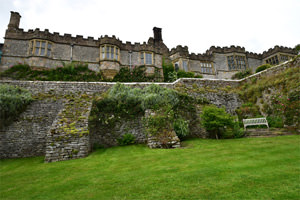 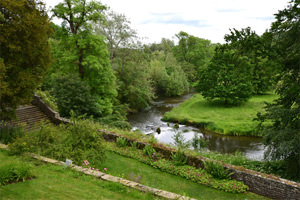 The River Wye beneath the lowest of Haddon's ramparts 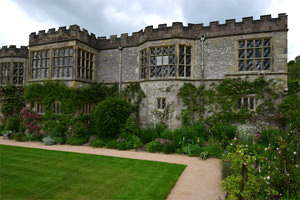 The three bays of the Long Gallery 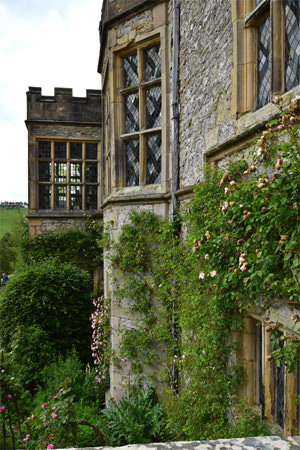 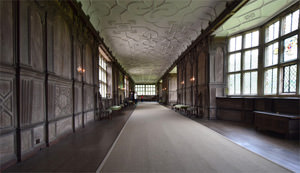 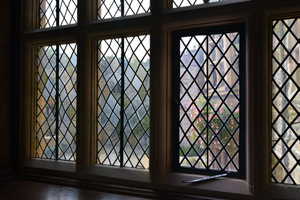 Detail of the glazing in Haddon's Long Gallery 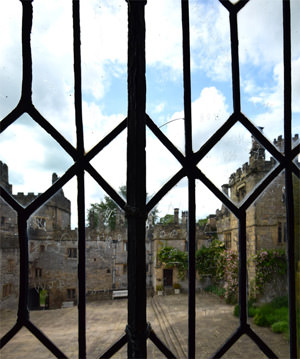 Craftsmen's grafitti on the glazing of Haddon's Long Gallery

Haddon's Elizabethan long gallery is 110 feet in length. Facing south, its three great bay windows pull in the available light. Other windows, particularly the full-width flank of glazing on the north-east end of the gallery, help lighten the 16th century oak panelling. A curiosity is the diamond-shaped panes of glass in these windows. They sit at a raked angle and create a undulating effect on each casement, one of folds arranged on the diagonal. This helps further disperse the light coming into the gallery. This can clearly be seen on the inside close-up and from the outside with their distinctive patterns of reflection. Extensive graffiti scratched into the glazing by craftsmen can be seen here and there.

Haddon's St. Nicholas Chapel is breathtaking. Crypt-like and tucked into the south-west corner of the lower courtyard, it remains the parish church of Nether Haddon, one of the smallest parishes in England. It is also thought that the chapel was originally a church for the parish, not a private chapel, as the enclosing of the lower courtyard took place after the chapel itself had been built. The chapel has vestiges of Norman masonry, a 12th century south aisle and a 15th century north aisle. The east window is inscribed with the date 1427 and a roof timber is carved with the date 1624, no doubt marking a repair date.

This is the stage for the chapel's extraordinary wall paintings, fresco seccoes, probably commissioned in the early 15th century and painted onto dry plaster. They are rare survivors from before the Reformation when much early church decoration was obliterated by plaster and whitewash. These paintings became visible in the 19th century and were fully uncovered in the early 20th century. 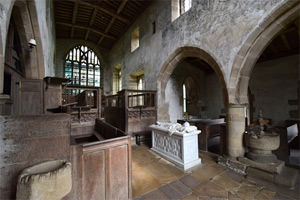 Norman arches and frescoes dating from the early 1400s 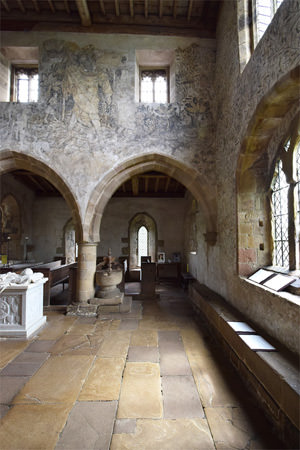 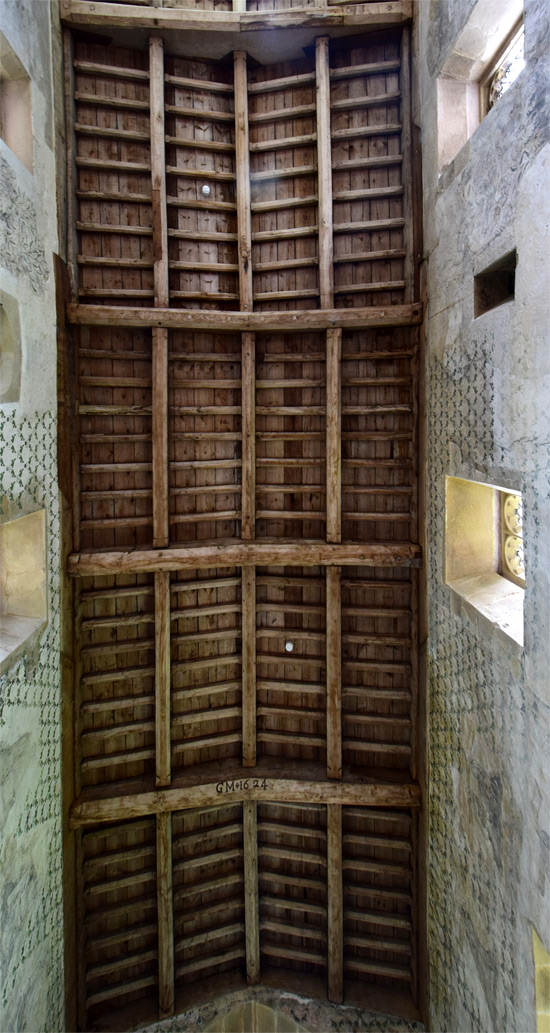 The chapel roof, repaired or replaced in 1624 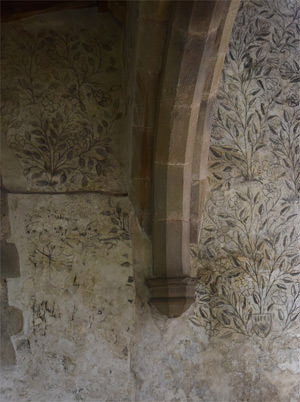 The three skeletons of a Medieval morality tale frescoe 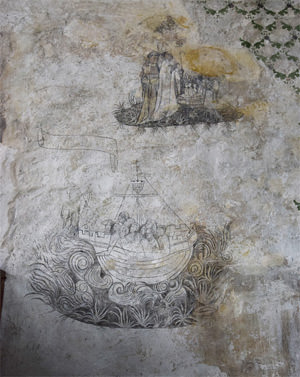 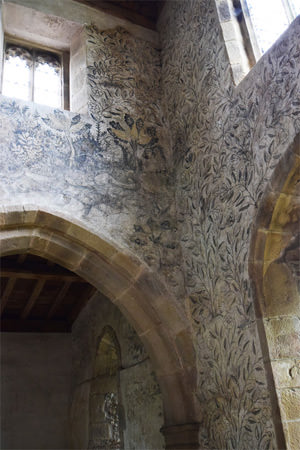 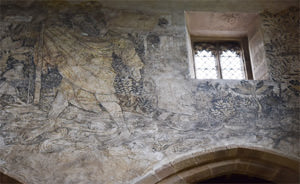 On the west wall of the nave, there are three memento mori skeletons. A legend is associated with this, recorded in several French poems of the early 14th century. Three kings or noblemen encountered three skeletal cadavers during a hunt. From their hollow frames, a voice spoke saying "As you are now, so once were we. As we are now, so you will be". Later that day, the legend tells that the noblemen were slain in their sleep.

Opposite the entrance, on the nave's south wall, a huge St. Christopher, carrying the Christ child, wading eastwards through wild water towards the altar, as convention required. Seeing an image of St. Christopher was consider to offer protection against sudden death, probably meaning not today.

On the north wall of the chancel, St. Nicholas is depicted calming a storm in a stylised ship abob the frothing waves. St. Nicholas, who subsequently came to be known as Santa Claus, was widely regarded as a protector of children. He appears on this wall in a complex cycle of some twelve scenes, perhaps the most famous of which is the miracle of the Golden Cup.

Opposite St. Nicholas, on the south wall of the chancel, are seven scenes from what is called the Holy Kinship cycle, a rare subject in English medieval wall painting according to Naydenova in her detailed article on these Haddon wall paintings (link below). These depict small family groups drawn from the Bible.

A tangle of flowers and leaves spread in dark grey, green-tinged motifs across the faded and smudged walls, the like of which you may see in only a few others places in England. (If you are unable to visit this exquisite place in person, a fine virtual tour is available on line on the Haddon Hall website.)