Barcelona's Passeig de Gràcia would have been a competitive whirl in the years between 1870 and 1914, with wealthy residents vying with each other to build or renovate homes on this fashionable city centre avenue. None more so than Josep Batlló, a silk manufacturer who commissioned Antoni Gaudí to radically alter what had originally been a sober town house built around 1877. Between 1904 and 1906 Gaudí, who had already started work on the city's La Sagrada Familia, transformed the building into a dazzling explosion of colour, light and curvilinear form. 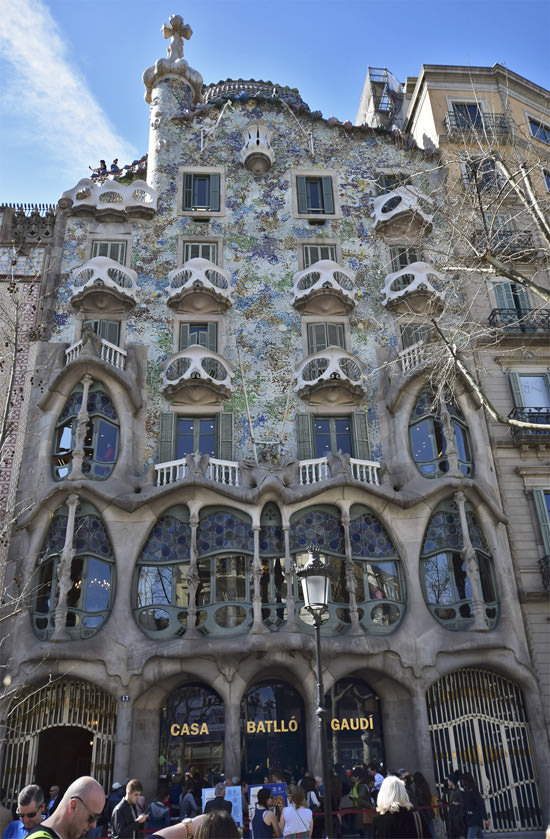 In comparison with Gaudí's nearby La Pedrera with its extravagantly curved façade, the façade of Casa Batlló has a façade that is very subtly undulating, with vertical waves almost imperceptibly rolling across its face from side to side. Raked by sunlight at a glancing angle, these undulations are obvious; otherwise they are practically indiscernible. Its prominent roof tower and dragon-scale canopy roof pushes the building's apex off-centre. A centrally-placed attic window with its tiny balcony (currently offering one of the city's ultimate, payed selfie stages) is perched atop the façade, the rest of which is either splattered with a daring, coloured mosaic of broken glass and ceramics or pierced by windows whose balconies progressively depart from tradition as they descend to street level. 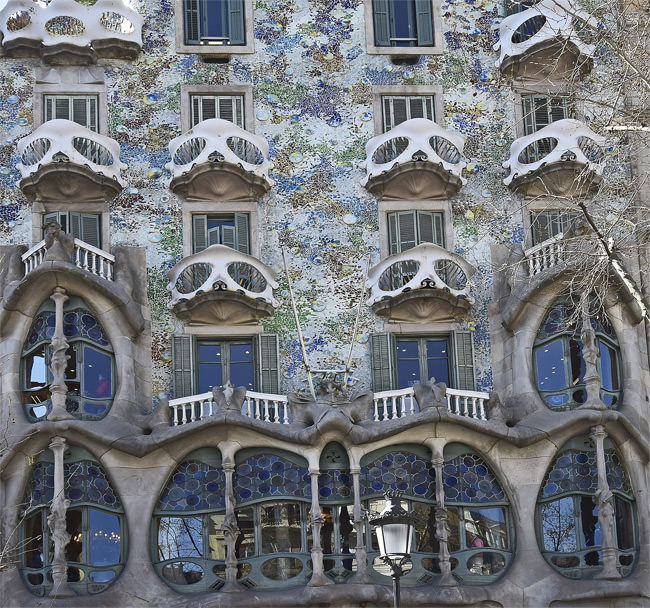 These balconies ooze out from the vertical in carved stone on the first three floors, then appear as wrought iron railings above, each being pierced by distinctive eye-socket openings. Whereas Casa Milà came to be known as La Pedrera, the stone quarry, Casa Batlló came to be known as Casa dels ossos, the House of Bones.

The mosaics begin as blue and green on the palest of greys, to be replaced on the roof with cobalt, green and red tiles. Everything is an exercise in colour as well as form. Up close, these mosaics possess a surprising sharpness. When viewed from the street, they more immediately evoke something of Monet's contemporaneous, impressionistic brush strokes.

Detail of glass mosaic on the Casa Batlló façade, Barcelona

Breaking the mould with curves

The great yawning mullions of the front wall of the principle apartment house a remarkable run of stained and clear glass windows, filling the inside with light and giving spacious views of the Passeig de Gràcia below. 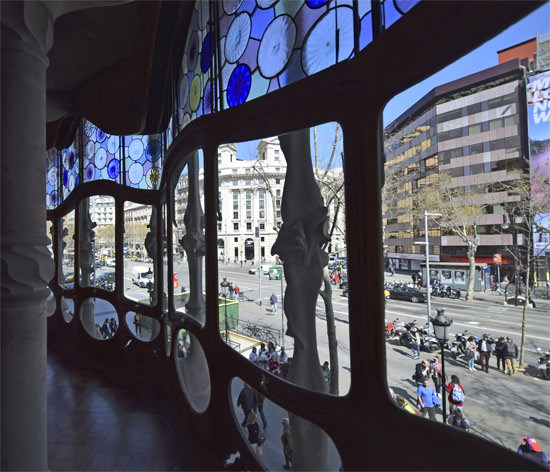 The large salon overlooking the street makes deliberate use of rounded doorways with glass panels that echo the design of the room's front windows - in both shape and colour.

Running up through the centre of the whole building is an audacious and exuberant twenty-six metre high atrium which is capped by an enormous glass roof canopy. In the middle of this 13 by 4 metre well rises a lift wrapped about by a central staircase, the two separating the atrium space into an unequal-sized pair, one on either side. Residents passing to their respective apartments would see a wall of blue tiles at every turn.

Once again, Gaudí uses this central atrium for ventilation and heating, piercing the building from top to toe, bringing light down into the building along with solar warmth. Again, as at La Pedrera, this system is matched with the provision of internal windows so that every apartment benefits. 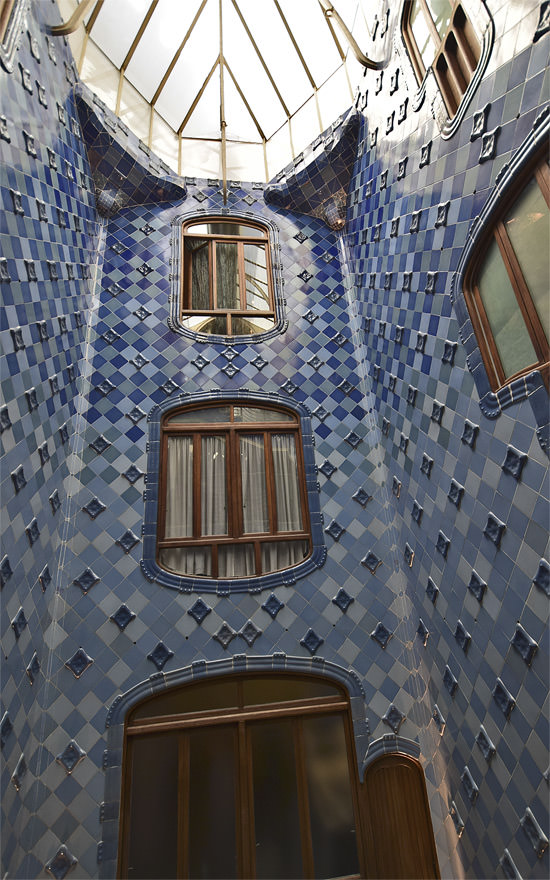 Notice how the colour combination of these blue tiles shifts chromatically from the palest of blues down below to cobalt blue at the top, helping to counteract what would otherwise have been a relative gloominess below flooded with an excess of light streaming in through the roof canopy above.

It is estimated that this atrium is adorned with 15,000 20cms square ceramic tiles in five different shades of blue laid on the diagonal. 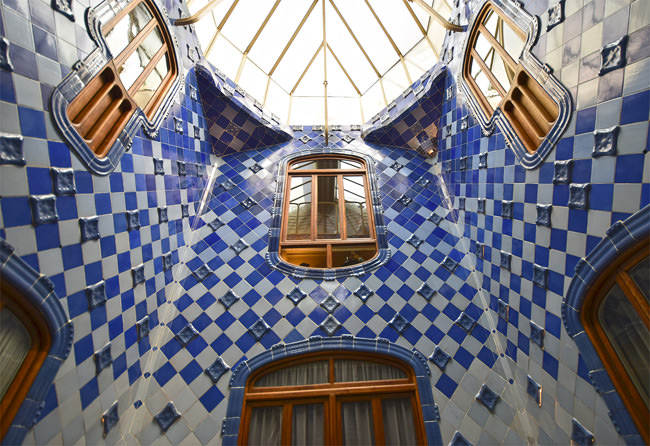 Although Gaudí never explicitly declared the significance of this design, one theory has it that the tower's cross is the hilt of St. George's sword and that the scaled roof is the dragon he slayed. In England, we think of St. George as being our patron saint, but he is also the patron saint of Catalonia. 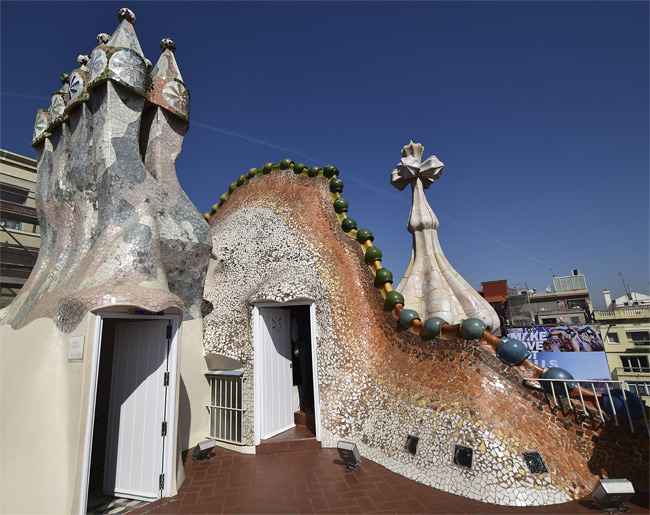 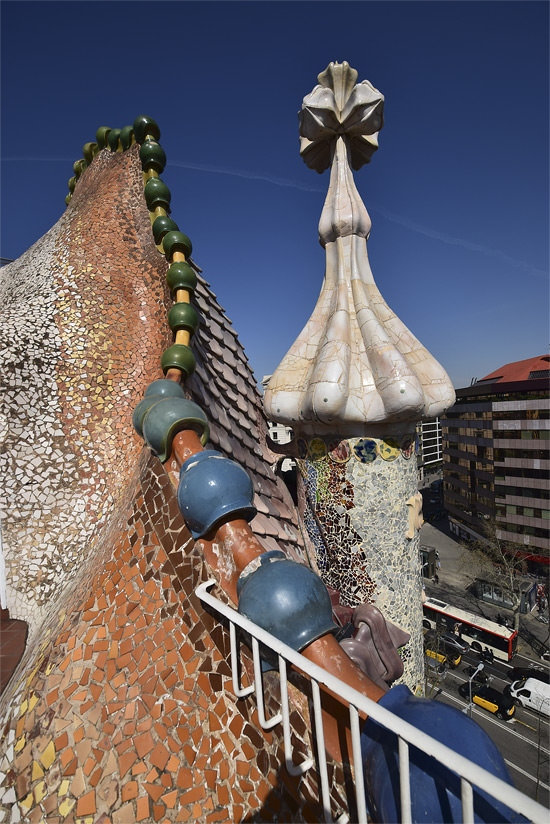 Visitors to Casa Batlló can pay to have themselves photographed standing on the small balcony high up on the building's façade. At the end of their visit they can collect their selfie envelope, graphically adorned with this St. George and the dragon interpretation: 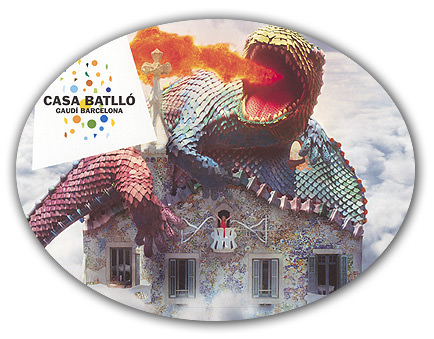 Each April 23rd, Catalonians celebrate Diada de Sant Jordi. In some years the balconies of Casa Batlló are draped with stylized red roses, taken to symbolise the flower that grew from the dragon's spilled blood.

The service attic spaces which support the roof terrace have wonderfully vaulted arches rendered with the same marzipan-like lime plaster seen throughout the building. The cool black and white floor tiles offer a calm antidote to the exuberance and frenzy encountered elsewhere. 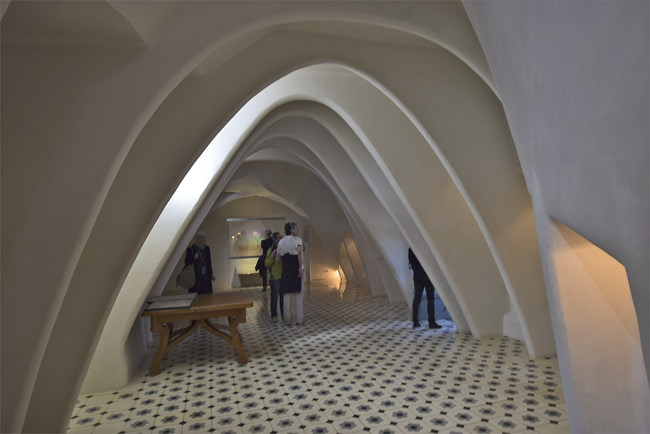 Casa Batlló is unique. It is one of the finest examples of Catalan art nouveau - Modernisme -
architecture, and it is undoubtedly a magnificent example of Antoni Gaudí's creative genius. Read up on the building before your visit and accept that you won't be the only one there admiring this extraordinary place!