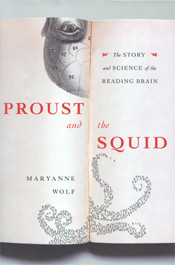 It is over twenty-two years since I had the privilege of sitting amongst youngsters to help them combat their dyslexia and more than that since I have fully read a densely-referenced book on the subject, but I wanted to prepare for reading Maryanne Wolf's recently-published Reader, Come Home by reading her Proust and the Squid: the Story and Science of the Reading Brain. She was a professor of child development at Tufts University and was director of the Centre for Reading and Language Research. Her light in this fascinating field did not reach me before I moved on to other things.

Proust and the Squid draws together strands of research on dyslexia since those days and is a pleasurable read for those previously primed with sufficient detail to take it all in. Wolf also lays out a wider-ranging and more profound argument starting with Sumerian cuneiform, Socrates, Plato and Aristotle, which may seem indulgent but turns out to be germane in the extreme. History tells us that Socrates decried the uncontrolled spread of written language. He was mentor to Plato who adopted this 'new technology' to record his spoken dialogues. In his turn, Plato was mentor to Aristotle who was by then fully immersed in the habit of reading. That shift from the spoken word to the written word transformed the world.

The Socratic method of questioning words and concepts conveyed through spoken language - because, as Socrates maintained, the unexamined life is not worth living - came with a huge intellectual burden. Without the written word to aid memory, everything one examined had to be memorised. Socrates judged the written word to be inferior to the spoken word in every way. The spoken word's probative function was considered infinitely superior to writing. "The muteness of the written word doomed the dialogic process Socrates saw as the heart of education", the author argues.

Vygotsky in his 1954 classic, Thought and Language (oh, that I could find my substantially-annotated copy!), would indeed have allowed Socrates the key importance of the generative relationship between spoken word and thought, between teacher and learner. But Vygotsky also stressed that the very process of writing involves an inner dialogue as probative as any Socratic spoken dialogue. Had Socrates lived one generation later he might have seen for himself how the business of getting words on to paper changes those very ideas in an equally generative, probative manner. As the author beautifully puts it: "Socrates never knew the secret at the heart of reading: the time it frees for the brain to have thoughts deeper than those that came before". It is what Proust called time to think beyond.

Reading similarly frees one from the thinking-burden of memory. Fluent reading, which is effectively automatic, is a process of integrating generated inferences into our existing knowledge. Put simply, it is a process where the left-brain decoding process hoses information into the right-brain's knowledge store.

The squid of the book's title is the author's reference to the way in which scientists first appreciated the way in which neurons fire and transmit to each other. They used the long central axon of the animal to reveal this. Similar methodology enables cognitive neuroscientists today to see what the brain has to do to read (and its clever way of adapting when things go wrong). Recent studies using brain imaging have helped researchers record the reading brain at work and have allowed detailed maps of which part of the two hemispheres are activated at each stage of the reading process - right down to the millisecond level. Wolf's book is replete with drawings that represent some of these findings.

This laboratory mapping has now covered not only different stages in development but also different languages. It is therefore just another step - albeit an essential one - to map the differences between the processes of 'normal' readers and the processes of readers with difficulties. In so doing, the dyslexic brain's compensatory strategies can also be mapped. It won't surprise anyone who has worked with dyslexic learners to know that the ingenious, sometimes dazzlingly creative (and even devious) strategies they employ when working with written language is the outward manifestation of their brains being 'differently wired' or 'differently muscled'.

Proust and the Squid is a three-part book: mankind's transition from oral to textual cultures; the 'normal' learner's brain development as reading is acquired and becomes fluent; and what it is that is going wrong with the reading process for dyslexic learners.

Wolf gives huge credit to Noam Chomsky and his 1970s work on generative linguistics, with its stress that dyslexia had to be a language-based disorder, rather than a purely perceptual and visual-based disorder. Those elements play their due part - in some cases. I, in turn, owe much to the lecturers and tutors who first introduced me to this key thread of applied linguistics when I first trained to become an English teacher. Though trends in understanding dyslexia come and go, the central pillar of generative linguistics supports the show!

With some dust blown off my knowledge of the psychology of reading, I'm now ready for Wolf's new book Reader, Come Home which explores the ways in which our adoption of screen-reading changes the internal structures within our brain - and what, if any, implications there may be for our culture and our world if we abandon the sort of 'deep reading' that we engaged in before the digital age swept over us. Is Wolf going to be a sort of later-day Socrates? Will the flag she waves be a false one or not?

The Clock of the Long Now - time and responsibility

The Lives of the Surrealists

The Seabird's Cry - the lives and loves of puffins, gannets and other ocean voyagers

LikeWar: The Weaponization of Social Media

Wilding: The return of nature to a British farm

Reader, Come Home - the Reading Brain in a Digital World