Our nearby town of Auch possesses a small but splendid museum which we sometimes visit with our students. Le Musée des Jacobins is named after the Dominican community that occupied the building in the XV century, not because any of its exhibits are related to the Jacobins. Situated between the river Gers and the Cathédrale Sainte Marie, the Convent of the Jacobins has housed the Auch Museum since 1979. The museum itself is modest in size but its exhibits are quite exceptional for a smallish town the size of Auch. 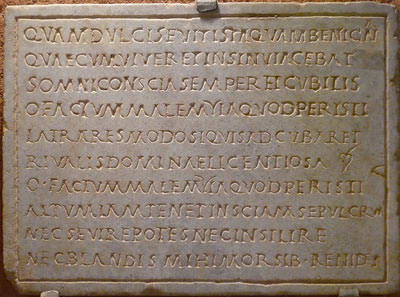 The museum’s ground floor, which overlooks a sheltered garden, houses a collection of Roman artefacts which include statues, mosaics, frescos and carved inscriptions, all of which originate from ancient Auch and its surroundings. 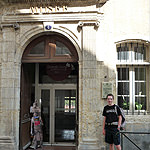 The entrance to the Musée des Jacobins in Auch 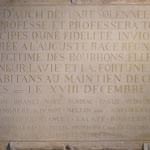 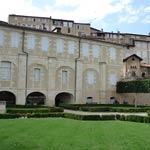 The sheltered garden of Le Musée des Jacobins in Auch 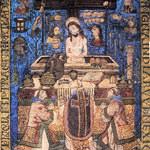 The Mass of St Gregory, a Mexican mosaic in feathers on wood

The first floor contains an astonishing mixture of rich and bizarre exhibits: an ancient Egyptian collection dating from the Roman period; a dazzling series of pre-Colombian collections, mostly from Peru and Mexico; and a collection of rare and precious 17th century sculptures, embroidery and statuettes from Peru, Argentina and Bolivia. The most celebrated object in this particular collection is the Mass of St Gregory, Mexican iconography in feathers on wood, dating from 1539 and believed to be the oldest surviving example of Christian art from the Americas.

On the museum’s upper floor is a mix of exhibits: notable photography from the late 19th century; detailed displays of period Gascon costumes, games and domestic paraphernalia; and some exceptional paintings of local 18th to 20th century artists, particularly of Jean Louis Rouméguère and Mario Cavaglieri. The latter’s Les Fiancés réconciliés dominates the end wall of one room and is unmissable. 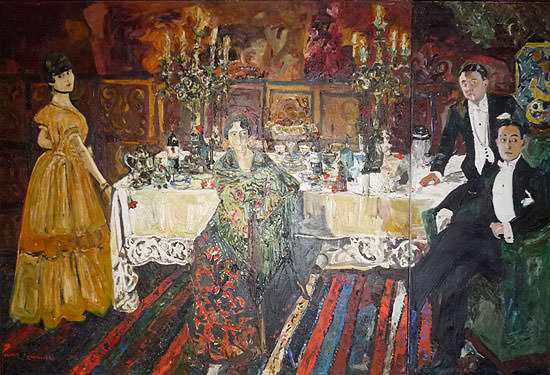 The Booth Museum of Natural History
Brighton's Royal Pavilion
Arundel Castle
Grasses, names and history
Footprints from the past
Markings in wood
A twelfth century church on our doorstep
Albert and the miniscule worlds
Frightened sheep, five dogs, a wild boar and the hunters
A van with a difference
An explosion of colour in Auch
Black, yellow and wonderful
A flame-proof amphibian
The European tree frog
Asparagus - the king of vegetables
Crossing the Tarn in style
The golden lady in our kitchen
Competition - caption for cat photos
Le Musée des Jacobins
In the footsteps of d'Artagnan
What course do we use?
Spring has arrived
Keeping an eye out for birds
One sheep, two sheep, a hundred sheep or some sheep?
Upside-down cake
Curry - a favourite in England
Googling
English adjective order
Pronouncing words that end in 's'
The Bassoues donjon